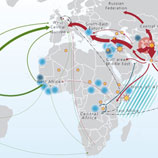 To illustrate the problem, UNODC issued the report Crime and Instability: Case Studies of Transnational Threats. The report focuses in particular on the impact of flows of drugs (cocaine and heroin), piracy around the Horn of Africa and minerals smuggling in Central Africa.

To reduce vulnerability to transnational threats, Mr. Costa underlined the need for development and security. "But we can not just throw money or troops at this problem, we also need law enforcement". He underlined the need for States to make more effective use of the United Nations Convention against Transnational Organized Crime, which was adopted a decade ago. Parties to the treaty, also known as the Palermo Convention, will meet this October in Vienna to review implementation.

Mr. Costa called for more intelligence-sharing and vigilance to fill the "black holes" where criminals operate with impunity: "There are many blank spots on our radar screens and our ignorance about what goes on has deadly consequences", he warned. He highlighted the recent discovery of a fleet of cargo planes bringing cocaine into West Africa and the Sahel. "What is shocking is that most major discoveries of illicit activity are being made by accident", said Mr. Costa.

Mr. Costa said that a change in attitude is essential in order to tackle transnational threats. "It is time to regard intelligence-sharing as a way of strengthening sovereignty, not surrendering it", said the head of UNODC. "When police stop at borders while criminals cross them freely, sovereignty is already breached - it is surrendered to those who break the law", he said. He therefore called for regional networks to monitor flows, share intelligence and carry out joint operations.

Since criminals are motivated by money, the way to increase their risks and reduce their benefits is to go after their assets. Mr. Costa therefore urged Member States to strengthen measures against corruption and money-laundering. To illustrate the massive profits made by crime, he said: "One line of cocaine snorted in Europe kills one square metre of Andean rainforest and buys 100 rounds of AK-47 ammunition in West Africa. Multiply this by 850 tons of cocaine per year and you see that is a bigger mismatch than David versus Goliath".

Because of the cross-cutting nature of organized crime, Mr. Costa called for a system-wide response, like putting criminal justice into the mainstream of all relevant United Nations operations and holding periodic debates on the threat posed by organized crime to stability.

In a statement made during the debate, the President of the Security Council made a number of recommendations on how to strengthen the response of Member States and the United Nations to transnational threats.