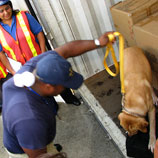 6 July 2010 - Almost 200 tons of cocaine are smuggled through Central America to North America every year, for a 2008 value of about $38 billion at destination. Central American States are increasingly threatened by the power of organized criminal groups, which have enough financial resources to gain control over entire territories and jeopardize national institutions. Isolated national responses are insufficient to cope with powerful groups operating across borders.

Recognizing the need for more coordinated efforts to combat the escalating threat posed by drug trafficking in the Americas, experts from the region recently met to discuss ways of sharing information on organized crime trends and responses.

The meeting was the first preparatory expert round table  of the Santo Domingo Pact and Managua Mechanism, an interregional initiative covering Central America and the Caribbean. The programme aims to facilitate policy coordination between Central American and Caribbean States in their fight against drug trafficking and organized crime, generate more information and statistics for evidence-based policies, develop an information-sharing mechanism on drug and crime trends and provide legal advice to assist policymakers in the States of the region.

In his opening remarks at the forum, Francis Maertens, UNODC Deputy Executive Director, said:  "An efficient fight against organized crime and drug trafficking in Central America is a shared responsibility between origin, transit and destination countries."

As a way forward, the experts agreed on the progressive development of a network of strategic analysts in Central America and the Caribbean. Central American Member States will increasing rely on the data and trends analysis that will be generated at the centres of excellence that are being established in the region. Additionally, an information-sharing mechanism will be installed in the region.

A similar expert meeting for the Caribbean countries will be held by the end of the year, to pave the way for a joint high-level meeting between Central America and Caribbean policymakers by the beginning of 2011.

The Globalization of Crime: A Transnational Organized Crime Threat Assessment