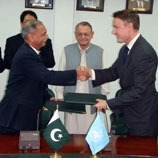 The UNODC programme comes at a critical time, as it is estimated that Pakistan is now the destination and transit country for approximately 40 per cent of opiates produced in Afghanistan (equivalent to one third of global production). In addition, the region has experienced a significant increase in the production of and trafficking in synthetic drugs in recent years.

"The financial revenues associated with this and other forms of organized crime, such as human trafficking, support prominent transnational criminal industries operating in and through Pakistan's territory",  stressed UNODC Representative in Pakistan Jeremy Douglas at the launch. Pakistan faces additional challenges to the criminal justice system, particularly with respect to policing, prosecutions and the courts.

The country programme, which is the result of strong partnership between UNODC and the Government of Pakistan, targets three critical and interdependent areas of development assistance: trafficking and border management; criminal justice; and drug demand reduction and HIV/AIDS.

In order to counter trafficking and strengthen border management, UNODC will work with the Government to empower Pakistani law enforcement and regulatory agencies to reduce trafficking and improve the management of borders with a view to increasing security and prosperity. Specifically, UNODC will support the enhancement of core capacities in relevant agencies, improve information collection and analysis and support Pakistan in defining, projecting and coordinating at the international level its interests with regard to trafficking and border management.

As regards criminal justice, UNODC will focus on the key entities responsible for securing and implementing justice, including law enforcement agencies, prosecution and prison services and anti-corruption authorities.

In order to help to reduce drug demand and control the spread of HIV/AIDS, UNODC will build on the Government's capacity to plan, resource and implement basic but comprehensive drug use prevention, treatment, rehabilitation and harm minimization services. UNODC will support systems for the collection of data on drug use, including through a national drug use survey, with a view to creating a platform for action.

The process of developing the country programme - which began in late 2009 - included mapping exercises, strategic consultations with the Government and donors and a series of baseline assessments and analytical briefs. A joint UNODC-Government of Pakistan programme governance committee will ensure that the programme is not a static document but rather a dynamic framework that can be adapted as it is implemented, incorporating lessons learned.

Mr. Douglas emphasized that "Together, we will work towards a safer community, free from the threats posed by organized crime and drug use and confident in the integrity of the criminal justice system to provide access to justice."