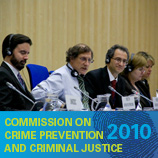 26 May 2010 - The nineteenth session of the Commission on Crime Prevention and Criminal Justice was held in Vienna from 17 to 21 May. "The challenge of this Commission is to act and to ensure that nations have the laws, knowledge and tools needed to deliver justice appropriate to the twenty-first century," said UNODC Executive Director Antonio Maria Costa in his opening remarks.

The main theme of the discussion was the threat posed by trafficking in cultural property. A lively debate, involving experts from around the world, took place. The Government of Azerbaijan displayed precious artefacts confiscated by its customs services. The Commission adopted a resolution to strengthen and fully implement mechanisms for the recovery and return of cultural property that has been stolen or trafficked, and for its protection and preservation. UNODC was requested, in cooperation with other relevant partners like the United Nations Educational, Scientific and Cultural Organization, to devote more attention to the issue, building on the recommendations of the expert group on protection against trafficking in cultural property.

The Commission also debated how best to follow-up on the Twelfth United Nations Congress on Crime Prevention and Criminal Justice, which had taken place in Salvador, Brazil, from 12 to 19 April. A resolution was adopted calling for the establishment of open-ended expert groups to study the problem of cybercrime and revise the United Nations standard minimum rules for the treatment of prisoners. There was also a call to improve the efficiency of Crime Congresses in the future.

There was a strong focus on prison conditions and the treatment of prisoners during the Commission and in side events. A resolution was adopted on the "Bangkok Rules" for the Treatment of Women Prisoners and Non-custodial Measures for Women Offenders.

A resolution was adopted on strengthening crime prevention and criminal justice responses against women. An updated version of the Model Strategies and Practical Measures on the Elimination of Violence against Women in the Field of Crime Prevention and Criminal Justice was adopted.

A resolution was adopted on strengthening the collection, analysis and reporting of comparable crime-related trends. In his opening remarks, Mr. Costa highlighted the lack of information on crime. "At the moment, unlike in other areas where the United Nations is the world's best information provider, we cannot report on crime trends: as a consequence, we cannot measure progress, or help establish policy on the basis of evidence. All we assess are approximate chalk outlines, familiar from crime scene investigations."

Evidence of a different nature, namely forensics, is needed to bring criminals to justice. One resolution focused on strengthening international cooperation in this field.

There were two resolutions on the work of UNODC: one on the realignment of the functions of the Office and changes to the strategic framework, the other expressing support for the development and implementation of an integrated approach to programme development at UNODC.

A resolution was approved on strengthening public-private partnerships to counter crime in all its forms and manifestations. "UNODC has forged such partnerships in the fight against corruption, drugs, terrorism and human trafficking. There is plenty of scope for building on that sense of shared responsibility in other areas like countering trafficking in cultural property, cybercrime, counterfeiting and identity-related crime. We will explore these possibilities," said John Sandage, Officer-in-Charge of the UNODC Division for Treaty Affairs.

Resolutions were also adopted on human trafficking, countering maritime piracy off the coast of Somalia, strengthening regional networks for international cooperation in criminal matters and hosting of the fourth World Summit of Attorneys General, Prosecutors General and Chief Prosecutors by the Republic of Korea in 2011.

In addition to the formal meetings, side events were held on a wide range of issues related to criminal justice and crime prevention, including the active participation of civil society.

The thematic discussion for the twentieth session of the Commission on Crime Prevention and Criminal Justice, to be held in 2011, will be "Protecting children in a digital age: the misuse of technology in the abuse and exploitation of children". It was decided that the prominent theme for the twenty-first session, in 2012, will be "violence against migrants, migrant workers and their families".

Nineteenth session of the Commission on Crime Prevention and Criminal Justice