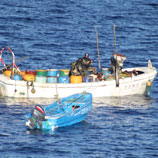 11 May 2010 - Based on information from the Government of Seychelles, UNODC is updating its recently published article on piracy.

The European Union and coalition navies, including the Seychelles Coastguard have recently been very effective in capturing significant numbers of Somali pirates in the region, but the problem of finding States willing to prosecute them remains. Many have to be released due to lack of evidence linking them to acts of piracy. However Seychelles, like Kenya, is currently prosecuting a number of pirates it has captured itself or has accepted from the European Union Naval Force Somalia Operation (EUNAVFOR).

Seychelles has indicated an interest in establishing a dedicated piracy chamber within the courts in the country for the prosecution of pirates under its new piracy law and its clearly elaborated policy for accepting suspected pirates for trial. However the country is unable to accept large numbers of pirates in its correctional system due to capacity constraints. Such an arrangement with Seychelles would therefore require options to transfer convicted pirates to prisons elsewhere - perhaps to Somalia.

Work to establish secure prisons in Somalia is currently being looked at by UNODC and the Contact Group on Piracy off the Coast of Somalia, a group established on 14 January 2009 pursuant to Security Council resolution 1851 to facilitate and coordinate actions among States and organizations to suppress piracy.

For now, Seychelles is doing its utmost to tackle the problem, which threatens its people, economy and sovereignty. With assistance from the European Union and UNODC, improvements are being made to the prisons including the construction of a new high-security unit. UNODC and other agencies, such as INTERPOL, are assisting the judicial and police sectors.

The Seychelles Coastguard is also receiving assistance from several forces and countries including NAVFOR, India, the United States, the European Union countries, the United Arab Emirates and China in the form of training and hardware, including communications equipment in order to enhance its capabilities to respond and its surveillance efforts. A short range patrol boat from the United Kingdom will be delivered to help increase the security of the northern approaches to the islands.

Information-sharing has also been improved and a prosecutor from the United Kingdom is being seconded to the Seychelles to help the Attorney General's Office deal with the pirates that are already in custody there and are due to be prosecuted. Talks to take this work forward continue.