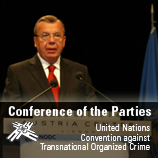 18 October 2010 - Violent crime, much of it drug related, is inflicting mayhem and scarring communities worldwide. Ten years after the United Nations Convention against Transnational Organized Crime was adopted in Palermo, the Conference of the Parties to the Convention has gathered in Vienna to spur progress towards curbing a grave threat to security, development and public health. Stopping transnational organized crime, which has "ballooned to global proportions," must become an international priority, said Yury Fedotov, Executive Director of UNODC.

At the fifth session of the Conference, Governments will be addressing new and emerging forms of crime, such as cybercrime and trafficking in counterfeit medicines and endangered species. Illicit goods are sourced from one continent, trafficked across another and marketed in a third. The immensity of the profits they generate is staggering. In some cases, the value of those flows through regions surpasses the GDP of States.

Here are some examples:

Many post-conflict States in Africa are still awash with firearms. Conflict creates a breeding ground for organized crime, since insurgent and terrorist groups often fund themselves through criminal activities. When criminal gangs trade guns for natural resources or corrupt officials facilitate human trafficking, the result is usually greater human misery and instability.

Crime is both a cause and a result of poverty, insecurity and underdevelopment; it drives away business, erodes human capital and undermines democracy. Crime prevention strategies should therefore be an integral part of international development policies.

Underscoring the need for robust regional responses to stem illicit activity, Mr. Fedotov urged all States to adhere to the Convention, which forms the global basis for extradition and mutual legal assistance, and to implement it more vigorously. The Convention is a powerful but underutilized tool, he added. Although 157 States have ratified the instrument, he remarked that more awareness was needed of how they could make more effective use of its provisions to forge cooperation.

Mr. Fedotov stressed the need for a comprehensive, system-wide response that strengthens resistance to organized crime at its points of origin, along trafficking routes and at the final destinations for its illicit goods. The United Nations must integrate responses to transnational organized crime into its peacekeeping, peacebuilding, security, development and disarmament activities.