UNODC to receive over 3 million dollars from Siemens Integrity Initiative 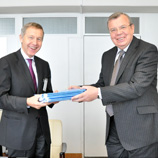 15 April 2010 - Siemens AG, the German industrial conglomerate, today granted $3.05 million USD to the United Nations Office on Drugs and Crime (UNODC), the largest ever donation made by the private sector to the Office. Selected through the Siemens Integrity Initiative, UNODC is one of the first recipients of financing for anti-corruption projects.  The US$100 million Initiative, which is part of the World Bank-Siemens AG comprehensive settlement agreed in 2009, will finance three UNODC projects over three years.

Mr. Yury Fedotov, Executive Director of UNODC, thanked Siemens for the donation, saying "I wish to see more collaboration with the private sector on corruption and crime issues. This is a goal that UNODC is actively pursuing. I hope that by Siemens' example, other companies will follow suit."

UNODC as the guardian of the United Nations Convention against Corruption (UNCAC) welcomes and appreciates contributions from all stakeholders in the collective fight against corruption. The Convention sends a strong message to companies to cooperate with Governments - their public counterparts, in accordance with its universal principles. The Convention contains a number of provisions that, while addressed to States, have a direct impact on corporate reporting of corruption incidents. The projects funded by Siemens will offer support in crucial areas of the UNCAC and initially be launched in India and Mexico.

Another project called Incentives to Corporate Integrity and Cooperation in Accordance with the United Nations Convention against Corruption (UNCAC) is intended to foster cooperation between the private sector and government authorities, especially law enforcement, in those two countries. It aims to create systems of legal incentives for companies, hence encouraging business to report internal incidents of corruption. One of its goals will be to show how Governments could encourage and reward companies that report corruption.

Finally, the Outreach and Communication Programme seeks to acquaint companies with the Convention so that they understand how it can make a difference in their daily work and dealings with public counterparts, and to encourage the business community to bring their integrity programmes in line with the universal principles of UNCAC.

The rapid development of rules of corporate governance around the world is prompting companies to focus on anti-corruption measures as part of their mechanisms to protect their reputations and the interests of their shareholders. Internal checks and balances are increasingly being extended to a range of ethics and integrity issues.

Corruption is costly for business. The World Bank has estimated that bribery has become a $1 trillion industry.  "The impact on the private sector is also considerable - it impedes economic growth, distorts competition and represents serious legal risks" said Mr. Fedotov.

The business community is one of the major victims of public corruption, but it can also be a powerful actor of change. "Now more than ever is the time for business to be proactive'' said Mr. Fedotov.

Your No Counts - Corruption Campaign