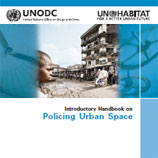 20 August 2011 - A 2010 UNODC report on global homicide trends showed stable or decreasing global homicide trends over the period 2003-2008 for the majority of countries for which data is available in the Americas, Asia, Europe and Oceania. While high-income cities have succeeded in controlling crime through the use of innovative techniques, low- and middle-income countries, particularly in Africa and Central America, still grapple with the challenges. Urban governments in low- and middle-income countries have increasingly sought to apply the techniques in new contexts, with growing success.

Under the Safer Cities Program, UNODC and the United Nations Human Settlements Programme (UN-Habitat) have issued a handbook to help prevent crime in cities and towns. The Introductory Handbook on Policing Urban Space provides practitioners, including government officials, police, municipal planners and members of civic groups, with strategies and good governance practices to help control crime in rapidly growing cities in low- and middle-income countries.

Among the best practices highlighted in the handbook are the following: state officials must establish links between police and other state institutions in order to effectively incorporate security concerns into wider government efforts; city planners should contribute to discussions about security and develop relations with police; and collaboration between urban planners, civil society, government officials, police and communities is essential in combating crime.

Related to the above publication, UNODC has also released a Handbook on Police Accountability, Oversight and Integrity

The handbook aims to assist countries in their efforts to develop effective police oversight and accountability systems within the their law enforcement structures. Tasks that involve law enforcement require a high degree of integrity within police agencies. The handbook provides guidance on how to deal with complaints from the public regarding policing activities, e.g. complaints on how investigations are handled and follow-up by police officers.

While the handbook emphasizes that the key players in enhancing police accountability are police officers themselves, it also describes an integrated approach that involves different actors in this system, including government representatives, the parliament, the judiciary, civil society and independent oversight bodies such as national human rights institutions.

The handbook is one of the practical tools developed by UNODC to support countries in the implementation of the rule of law and in strengthening their criminal justice systems.