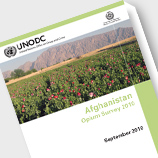 21 January 2011 - Rising opium prices may encourage farmers in Afghanistan to plant more opium poppy, warns UNODC in its Afghanistan Opium Survey 2010, released yesterday. The high prices are based on speculation that there will be shortages because an opium blight halved production in 2010 and because of ongoing military operations, which are creating uncertainty among opium poppy farmers regarding future cultivation.

"There is cause for concern. The market responded to the steep drop in opium production with an equally dramatic jump in the market price to more than double 2009 levels", said Yury Fedotov, Executive Director of UNODC.

"We cannot continue business as usual", stressed Mr. Fedotov, noting that after a steady decline from 2005 to 2009, prices are rising again. "If this cash bonanza lasts, it could effectively reverse the hard-won gains of recent years".  The cause of the decline in production was a naturally occurring plant disease that ravaged Afghanistan's major opium poppy-growing provinces of Helmand and Kandahar.

Impact on the Afghan economy

Poppy-growing households have seen a cash windfall. In 2010, the average farm-gate price of dry opium at harvest time was $169 per kilogram, an increase of 164 per cent compared to 2009, when the price was $64 per kilogram. Despite the drop in production, the gross income per hectare of opium poppy cultivated increased by 36 per cent to $4,900. The average annual income of opium poppy-growing households in 2009 was 17 per cent higher than for households that had stopped cultivating opium poppy.

However, the dramatic opium price increases at the local level did not translate into similar price increases in neighbouring countries.  Afghan traffickers are heavily involved in shipping opiates - morphine and heroin - abroad, notably to the Islamic Republic of Iran, Pakistan and, to a lesser extent, Central Asia. Cross-border prices remained relatively stable.

As a result of falling production and stable cross-border prices, income generated by the opium economy for Afghan criminal groups halved in 2010. The total value of exported opium and heroin was $1.4 billion, compared with $2.9 billion in 2009, a decrease of 50 per cent. The gross export value in 2010 amounted to 11 per cent of GDP, compared to 26 per cent in 2009.

On the bright side, rural development has encouraged the cultivation of licit crops, and a distinct correlation was seen between the provision of agricultural assistance and a drop in opium poppy cultivation. Giving farmers access to markets also helped them shift away from opium poppy cultivation. In villages located close to agricultural markets, farmers planted less poppy than in those that had no access to markets.

"We encourage donors and the Afghan community to continue to invest in alternative livelihood programmes and increase market access for farmers. But security, stability and an environment free of corruption remain the key elements to making such initiatives effective and sustainable", said Mr. Fedotov.