UNODC teams up with Mexico to launch statistics centre 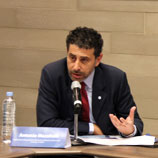 The centre, which will be located at the Institute's premises, will develop field surveys, share knowledge in the field of crime statistics and organize an annual international conference on statistics. It will also help to upgrade the methodologies used to generate statistics and provide policymakers with tools to address the challenges of public security and justice. These necessary services will benefit not only Mexico but also other countries in the region.

At the press conference held to present the initiative, Antonio L. Mazzitelli, UNODC Representative at the Regional Office for Mexico, Central America and the Caribbean, and Eduardo Sojo, President of the National Institute of Statistics and Geography, said that the centre of excellence would place the country among regional and global leaders in the field of crime and justice statistics and its results would be accessible to a variety of users, ranging from academics to national authorities and civil society organizations.

The National Institute of Statistics and Geography, a public institution with more than 25 years' experience in the field of demographic and geographical statistics, has substantial capacity for data collection at the municipal, state and federal levels in Mexico. Its work is widely recognized and the centre of excellence will enable it to expand its mandate to include the generation of statistics in the areas of governance, public safety and justice.

The new centre of excellence will begin its operations in the first quarter of 2011, having received an initial contribution of $1 million from the National Institute of Statistics and Geography.

The centre in Mexico will form part of a network of centres of excellence currently being developed by UNODC in that country and in Central America in cooperation with national and regional bodies, such as the Centre of Excellence on Maritime Security, which opened in Panama in June 2010. 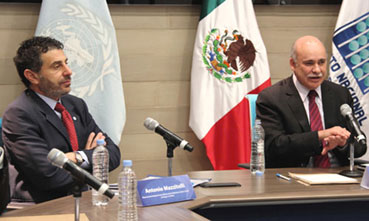 Centres of excellence are intended to serve as focal points for expertise, training, data collection and analysis in various thematic areas that form part of the UNODC mandate to promote justice and security. Through effective support, policy development and training of professionals, centres of excellence seek to build national and regional capacity to contain threats stemming from trafficking, drug abuse, organized crime and related violence and to strengthen the rule of law.