Rani: an unwavering advocate for freedom from slavery and human trafficking 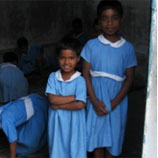 4 January 2011 - With more than 2.4 million people held captive across the world, human trafficking has become one of today's major crimes and issues of social concern. Virtually every country in the world is affected by this crime, whether as a country of origin, transit or destination for victims.

In South Asia, over 150,000 people are trafficked every year for sex work, labour, forced marriage, or organ trade due to poor economic conditions that often contribute to increased vulnerability.

UNODC South Asia interviewed Rani Hong, a survivor of human trafficking and the founder of the Tronie Foundation to support survivors of the crime. For the past 10 years, Rani has been sharing her story across the globe to inspire people and collect support for her  work with survivors of human trafficking. In 2002, her testimony before the Washington State legislature in the US helped pass a law that had been stalled for four years, making it the first state in the country to pass anti-trafficking legislation. Recently, Rani attended the launch of the UN Voluntary Fund for Victims of Human Trafficking.

Excerpts from the interview:

UNODC: Can you share with us your personal story and tell us how this experience led you to help others?

Rani Hong: I was born and lived in Southern India with loving parents. However as our financial conditions deteriorated, my father's health worsened. A respectful woman from the village offered to ease my father's burden by taking care of one his children. She said she would cloth me, feed me and educate me. I went to live with her family just down the road from our house. I remember my parents visiting me and how happy they were to see that I was well taken care of. One day when they came to visit me and I was gone.

I was sold by the lady to a man and was told that he was my master. I was only seven years old. When I tried to protest - they beat me brutally. I was starved and put through much cruelty. I literally saw cages where children were held and seasoned for submission. They broke my will and damaged my spirit. Still the people wanted to make a profit. They put me up for international adoption and that is when my life changed. I was soon adopted by a lady in the Unites States of America. Ironically, my deterioration became my passport to freedom.

In 1999, after 21 years, I returned to the country I hated most - India, for a short vacation. Miraculously in a tourist hotel in Southern India, I met my birth mom and that was when I learnt that my parents had no idea where I went and why I had disappeared. It is after that encounter, the missing pieces came together and I got the picture - I was trafficked at the age of seven and sold into slavery. The feeling was horrific and left me numb. That is when I decided that I needed to do something to help all those innocent children and people who are trafficked into slavery.

UNODC: What does your organization - the Tronie Foundation - do?

Rani Hong: Being a survivor of human trafficking myself, I helped establish this foundation out of compassion for exploited women and children and with the desire to encourage survivors to harbour hope and freedom. We are one of the few survivor-led organizations fighting modern day slavery. The foundation was created to advocate for human rights and rehabilitate survivors of human trafficking. I travel around the world educating non-governmental organizations, Government counterparts, students and other institutions about the horrors of human trafficking. I share my personal story with people wherever I go, so as to inspire and encourage them to take action. The Foundation is looking to partner with corporations that share similar social concerns to provide a voice and share resources.

UNODC: What do you see as the linkage between human trafficking and HIV and AIDS?

Rani Hong: While I was in India I visited one of the red light districts in Mumbai. I met this young girl, no more than 16 years old. She was lying on a bed in a protection home and was very sick. She was HIV positive and dying. She was also a victim of human trafficking and sold into prostitution in one of the red light districts. Eventually, she was infected with HIV/AIDS. This is a high price to pay for any victim of human trafficking. Often women and girls who are sold and forced into commercial sex work are not in positions to negotiate for safe sex. We need to educate people on the linkages between human trafficking and HIV/AIDS.

UNODC: What message do you have for other actors involved in fighting human trafficking?

Rani Hong: We've got to bring hope and inspiration to people who are sold and subjugated into slavery against their will. From my own traumatic past that still haunts me, no child should be deprived of his/her freedom and dignity. Every innocent child who is sold into slavery, every child who is trafficked pays a high price and we cannot allow that. Some say I am the face of slavery - but I am also the face of hope and rescue. Under the Tronie Foundation, I am developing the survivor-led mentorship programme for women and children. We all need to come together and become their strength. We need to raise a voice together and end slavery.

Together we can prevent crimes against women and children sold into slavery.  I ask for partners such as the United Nations and their audience to join me as I carry my voice around the world with millions of victims and survivors of slavery, as we all work together to carry a global anti-trafficking message.

In a bid to help the victims of human trafficking, Secretary-General Ban Ki-moon in November 2010  launched the United Nations Voluntary Trust Fund for Victims of Trafficking in Persons. The Trust Fund is one of the most important elements of the new United Nations Global Plan of Action to Combat Trafficking in Persons, adopted by the General Assembly in July 2010. It will provide humanitarian, legal and financial aid to victims of human trafficking with the aim of increasing the number of victims who are rescued and supported, and broadening the extent of assistance they receive. UNODC will administer the Fund, with the advice of a Board of Trustees appointed by the UN Secretary-General, in accordance with the Financial Regulations and Rules of the United Nations and the relevant policies and procedures promulgated by the Secretary-General.