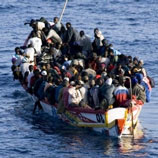 20 June 2011 - Inequalities in income, education and opportunities are major root causes of human trafficking, inducing many to migrate to seek for a better life. Thousands of migrants instead become victims of labour exploitation, a new form of slavery that occurs on a massive scale. Due to growing inequalities in destination countries, this exploitation is increasingly seen as 'normal'.

In order to gain a deeper understanding and to analyze the interconnected factors that foster the exploitation of people in slavery-like practice, the Organization for Security and Cooperation in Europe (OSCE) is hosting a conference entitled "Preventing Trafficking in Human Beings for Labour Exploitation: Decent Work and Social Justice".

OSCE Special Representative and Coordinator for Combating Trafficking in Human Beings, Maria Grazia Giammarinaro, emphasized that trafficking for labour exploitation is best prevented by building a fair and democratic society that respects human rights and workers' rights and bans all forms of exploitation, including exploitation of migrant workers.

"The criminal justice response is crucial to combat human trafficking, but it is not enough. Prosecution should be complemented and strengthened by labour inspections, individual and collective mediation through trade unions, the use of codes of conduct to ensure that human rights are respected in all work places and measures aimed at social inclusion that enable trafficked persons to have access to remedies and compensation", she added.

Speaking at the forum, UNODC Executive Director Mr. Yury Fedotov said, "Trafficking in persons is a global challenge demanding a global response, strong partnerships and the commitment and engagement of all sectors. Only through international cooperation can we stop criminals making grotesque profits from the exploitation of human beings. We need to make global migration and the global labour markets safe for those who dream of a new life. Indeed, this is why human trafficking is so destructive to human dignity. It takes ordinary people's dreams for a better life and turns them into nightmares."

The conference is being held under the auspices of the Alliance against Trafficking in Persons, an OSCE-initiated 40-member advocacy platform of major international and non-governmental organizations.

The UN Voluntary Trust for Victims of Human Trafficking