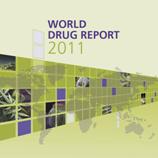 21 June 2011 - The state of the world drug market will be unveiled in the 2011 World Drug Report to be released by UNODC on Thursday 23 June 2011. Being launched simultaneously in London and New York this annual report highlights developments across the global drug market to explain the factors that drive the world's consumption, production and trafficking of illicit drugs. Members of the press are invited to attend briefings in these two locations where the latest findings on emerging and established drugs threats will be presented.

UNODC is a global leader in the multilateral effort against illicit drugs and international crime. The World Drug Report provides an annual analysis of global trends in the four main drug markets: opium/heroin, coca/cocaine, cannabis, and amphetamine-type stimulants.