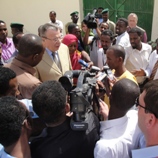 29 March 2011 - UNODC Executive Director Yury Fedotov has expressed his Office's commitment to building prosecutorial capacity in Somaliland in order to assist in efforts to deal with piracy in the region.

During a series of meetings in East Africa, Mr. Fedotov met Mr. Ahmed Mohamed Mohamoud, President of Somaliland, and Minister of Justice Mr. Ismail Muumin to discuss the counter-piracy work of UNODC in the region. By enhancing ongoing efforts to deal with piracy, UNODC is assisting authorities in tackling that crime and in addressing the underlying causes of piracy with a view to achieving longer-term success.

While in Somaliland, Mr. Fedotov also visited the recently refurbished Hargeisa Prison. Officially opened in November 2010, the prison forms part of UNODC counter-piracy work in Somaliland and is the first facility in the area to have been renovated in the past 50 years. The prison is seen as playing a critical role in tackling piracy and will provide additional prison space for pirates arrested by the Somaliland Coastguard and other prisoners.

UNODC involvement in Somaliland follows similar initiatives in neighbouring Puntland and Somalia relating to prison and judicial reform. Given the estimated total of 350 suspected and convicted pirates held in Somaliland and Puntland, the complementary components of prosecutorial and prison services are key in responding to piracy in the region.

Speaking of the need to build a coordinated response to piracy, Mr. Fedotov noted: "Critical to the success of fighting piracy is ensuring that judicial provisions on land are in place. UNODC are working with the Somaliland authorities in their judicial reform process and prosecution services in a bid to step up responses to what is clearly a scourge both to maritime trade and travel and to local development."

These initiatives come in response to growing global concern caused by an alarming increase in the number of piracy incidents in the region in recent years. While an average of 26 acts of piracy per year were reported to have been committed off the coast of Somalia between 2000 and 2007, that number jumped to 111 in 2008 and quadrupled to over 400 in 2009 and 2010, affecting ships off the coast of Somalia and in the Gulf of Aden, the Red Sea and the Indian Ocean. Some 790 crew members were taken hostage in 2010 alone.

The opening of Hargeisa Prison represents a key step in helping to boost anti-piracy efforts at the regional level and addresses the concerns of neighbouring countries over the housing of convicted pirates in their prisons. In addition to the refurbishment, UNODC has been working with prison staff to provide training, improve search and patrol methods and supply uniforms for prisoners. The Executive Director praised the prisoner rehabilitation efforts undertaken by Somaliland to provide prisoners with sewing, welding, woodworking, reading and writing skills: "The shift in approach by authorities to supplement incarceration with skill development and rehabilitation is critical. This level of prison reform will assist in tackling the long-term goal of dealing with piracy and UNODC is glad to be part of that process."

Piracy in the region has led to several devastating short- and long-term consequences. Since the surrounding waters are part of a key global shipping route, the growing incidents of piracy have a negative impact on regional economies and world trade, while in the area of development, the delivery of much-needed aid provided by the World Food Programme has been hampered, affecting the lives of millions reliant on that food source and exacerbating an already dire situation.

In recognizing the critical importance of multilateral cooperation in dealing with the piracy issue, the government of Somaliland has indicated its strong support for the UNODC Counter-Piracy Programme.