Corruption in the Western Balkans 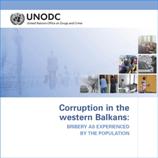 17 May 2011 - On the basis of a survey of more than 28,000 people in the Western Balkans in 2010, UNODC has released its new public sector bribery survey for the area. Funded by the European Commission, the report "Corruption in the Western Balkans: Bribery as Experienced by the Population" notes that one in six respondents were exposed to some form of bribery involving a public official in the 12 months before the survey.

Focusing on the Western Balkans (i), the report finds that corruption is a major concern among citizens of that area, ranking a high third in the list of most pressing issues after unemployment and poverty but well ahead of security and education. Highlighting how corruption affects everyday life, the report details the extent and levels of bribes paid for basic services. Experiences also vary: the percentage of citizens who paid a bribe, among those who had contacts with public officials, range from six per cent to 21 per cent.

Reflecting the harsh repercussions of corruption in everyday life, the report notes that 57 per cent of bribe-givers gave bribes to a doctor. This was followed by kickbacks to police officers (35 per cent), nurses (33 per cent) and municipal officers (13 per cent) (the sum is higher than 100 per cent because many bribe-payers paid bribes on several occasions).

The report provides comprehensive data on the sectors most affected, the role of public officials and bribe-payers and forms of bribery in the Western Balkans. By offering a sound benchmark on which to build, it aims to assist authorities in strengthening their efforts to respond to corruption. Furthermore, by surveying actual occurrences of corruption and bribery rather than perception, the report provides an experience-based indicator of how bribery affects the dealings of ordinary citizens with the public administration.

Speaking on the release of the report, UNODC Executive Director Yury Fedotov praised the countries and areas surveyed for acknowledging the need to conduct this evidence-based work: "The efforts of the countries of the Western Balkans in their ongoing work to curb corruption are commendable - all States looked at in this report have signed up to the world's foremost tool in combating this crime, the United Nations Convention against Corruption, and are fully engaged in the Convention's peer review mechanism. The areas highlighted in the report provide us with a realistic viewpoint of the on-the-ground situation, which is so critical to authorities as we collectively work together in countering corrupt practices at all levels."

This was echoed by Commissioner Štefan Füle, Member of the European Commission for Enlargement and European Neighbourhood Policy, who said: "This report offers a very useful assessment of the situation regarding corruption in the Western Balkans. Major challenges remain in the region as regards, among other issues, the rule of law and the fight against corruption and organized crime. The European Commission has been following this issue very closely and attaches great importance to it, since it is undoubtedly one of the most important benchmarks for any candidate or potential candidate country wishing to fulfill its European perspective."

In addition to the data concerning amounts, types and recipients of bribes, the report also details the reasons for this form of corruption. Of all citizens who reported the payment of a bribe, 43 per cent said that they had instigated the offer to bribe a public official, while a similar number (45 per cent) noted that it was the public officials concerned who either implicitly or explicitly made the request. In terms of the type of bribe, two thirds of respondents confirmed (as had been expected) that cash is the primary form of bribe used, while 22 per cent indicated that food and drink were offered or requested as a form of "payment".

A telling set of numbers gleaned from the survey highlights the reasons given by respondents for paying bribes: 28 per cent claimed that by paying an official they "received better treatment", while the same number claimed that a payment "sped up the procedure". Sixteen per cent indicated that they had paid at least one bribe during 2010 in order to "avoid paying a fine", while 12 per cent reported that the money had helped to "finalize a procedure".

Of all bribe-payers, a mere 1.5 per cent reported their experience to the authorities. Thirty per cent believed that "nobody would care" if they were to report it and that reporting would therefore be a pointless exercise, while 22 per cent indicated that bribery is "common practice". Eighteen per cent said that bribery symbolized gratitude for something and was therefore a positive practice, while one in five said that they received a direct benefit from paying a bribe and for that reason saw no reason to report it.

In addition to surveying bribery related to public service delivery, the report also looks into public sector recruitment and vote-buying before elections. With regard to the former, one in eight of those respondents who had secured public sector employment in the three years prior to the survey admitted to offering a bribe of some form in order to be hired. Such bribery took the form of monetary payment, the giving of a gift or a return favour; the proportion of respondents who reported such bribery fluctuated from six per cent in one area to 28 per cent in another area.

Lastly, the report noted that on the occasion of the most recent general elections held in the countries and areas of the Western Balkans, an average of eight per cent of citizens were asked to vote for a certain candidate or political party in exchange for a concrete offer, such as money, goods or a favour.

(i) The survey covers Albania, Bosnia and Herzegovina, Croatia, Montenegro, Serbia and the Former Yugoslav Republic of Macedonia, as well as Kosovo. All references to Kosovo shall be understood to be in the context of Security Council resolution 1244 (1999).

Report: Corruption in the Western Balkans: Bribery as Experienced by the Population