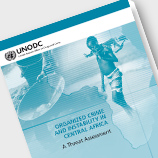 10 November 2011 -  Conflict in Central Africa appears to have declined markedly in recent years. According to the UNODC report Organized Crime and Instability in Central Africa: A Threat Assessment, the current instability and violence, mostly affecting the Democratic Republic of the Congo, increasingly seem to be the result of criminal acts occurring in a context of persistent lawlessness and weak State institutions rather than the product of war. This situation makes it difficult to provide the criminal justice response that crimes such as murder, rape and trafficking in children require.

Although political grievances remain, much of the current instability and lawlessness is tied to activities such as trafficking in minerals and other forms of contraband.

Those profiting include members of illegal armed groups and corrupt elements in the military who have an economic interest in maintaining the current situation. Militant organizations may have political origins, but today many could be better described as criminal groups.

The largest source of finance for these groups is the minerals trade. The illicit trade in Congolese gold alone is worth an estimated $120 million, about ten times the value of the country's legitimate gold exports and roughly twice the value of coffee, its largest agricultural export. Other sources of illegal income include trafficking in cannabis, timber and ivory.

"Unless the flows of contraband are addressed, incentives for armed groups to perpetuate instability, lawlessness and violence will persist and it will be difficult to build state capacity in this region," the study notes.

The current approach to tackling the instability in the Democratic Republic of the Congo has focused heavily on the military. The fighting of insurgencies requires soldiers, but the fight against crime requires a functional and accessible criminal justice system. The building of law enforcement capacity in the region requires capacity-building and reform of the police, courts and prisons. In parallel with this long-term effort, the international community must continue to support immediate interventions to undercut the financing of armed groups.

Organized Crime and Instability in Central Africa: A Threat Assessment