Methamphetamine on the rise in East and South-East Asia 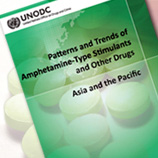 30 November 2011 - East Asia and South-East Asia are major centres for the illicit manufacture of amphetamine-type stimulants. There has been a significant expansion in the manufacture, trafficking and use of methamphetamines in the past five years. This, plus the increasing involvement of transnational organized criminal groups in the trade of amphetamine-type stimulants, poses a growing threat to security and public health in the region, warns a new report by UNODC.

The report, Patterns and Trends of Amphetamine-Type Stimulants and Other Drugs: Asia and the Pacific, highlights the latest patterns and trends with regard to amphetamine-type stimulants, a market which includes amphetamine, methamphetamine, methcathinone and ecstasy-group substances, as well as other illicit drugs in East and South-East Asia. It also provides an overview of the situation in the neighbouring regions of South Asia and the Pacific.

"The international community has taken its eye off the ball on illicit drug production and trafficking in East Asia," said Gary Lewis, regional representative of the UNODC Regional Centre for East Asia and the Pacific. "The numbers are heading in the wrong direction. We must be proactive on all fronts to assist the countries of the region to counteract these threats and prevent East and South-East Asia from again becoming a major illicit drugs hub."

In addition to endemic threats from regional organized crime groups, the report draws attention to the growing reach and presence in Asia of transnational organized criminal groups from outside the region. Methamphetamine trafficking by African groups has been officially reported by China, Cambodia, Indonesia, Japan, Malaysia, the Philippines, Thailand and Viet Nam. Attempts by Iranian groups to establish illicit amphetamine-type stimulant manufacturing operations in Japan, Malaysia and Thailand have also been reported.

In terms of illicit drug use, amphetamine-type stimulants rank among the top three drugs of use in all 15 countries surveyed in the region. In 10 of those countries, the use of amphetamine-type stimulants increased during 2010. Only Australia, Japan, New Zealand, the Philippines and the Republic of Korea reported stable or declining usage. In addition, the use of crystalline methamphetamine has expanded to countries that had not previously reported it, such as Cambodia, China, the Lao People's Democratic Republic, Myanmar, Thailand and Viet Nam. The manufacture and use of ecstasy declined in East and South-East Asia, which is consistent with global trends.

Drawing attention to greater demand for treatment, Mr. Lewis said: "Drug dependence is a chronic relapsing health condition which should be treated in the health sector based on scientific evidence and on each individual's treatment needs. We need more motivational, cognitive-behavioural and case-management approaches. The vast majority of people can be efficiently treated on an outpatient basis."

2011 Patterns and Trends of Amphetamine-Type Stimulants and Other Drugs, Asia and the Pacific (pdf)