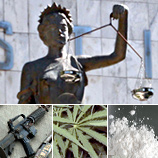 9 November 2011 - Over the past decade, Paraguay has been confronted with a large number of criminal threats. The country is currently the largest cannabis producer in South America and accounts for 15 per cent of the world's production of that drug. It is also a major transit zone in South America for cocaine, firearms and the import and export of pirated goods. According to UNODC estimates, between 30 and 40 tons of cocaine from neighbouring States pass through Paraguay each year, while the country is also a transit and destination point for human trafficking.

In a bid to increase the efficiency and responsiveness of Paraguay in tackling the combined threats of illicit drugs, trafficking and transnational organized crime, UNODC and the Government of Paraguay have launched a four-year national integrated programme with a budget of $10 million. The programme, entitled "Strengthening the rule of law, security and justice in Paraguay", is aimed at strengthening security at the national and regional levels and is based on the premise of shared responsibility.

Speaking on the new programme in the capital, Asunción, UNODC Regional Representative for Brazil and the Southern Cone Bo Mathiasen elaborated on that issue: "International cooperation is key. Strengthening national institutions can create effective justice systems and enhanced levels of security and assist in reducing crime in the country and in the region."

Noting UNODC efforts in working with Paraguay to tackle the country's drug- and crime-related issues, the Minister of Foreign Affairs, Jorge Lara Castro, noted: "Efforts like this are based on the recognition that we face a crisis of law, security and citizen justice at national, regional, and global levels, the causes and consequences of which must be tackled and overcome."

"We are convinced that the fight against violence and organized crime, as well as poverty and inequality, is what will allow us to move forward as sovereign, democratic and independent countries toward a strengthened rule of law State able to guarantee cooperation, comprehensive development and a dignified life for all citizens. We celebrate this programme as a step in this direction," he added.

The programme, which will see UNODC providing a range of technical assistance to Paraguayan authorities, focuses on three main areas: organized crime and trafficking; justice and countering corruption; and drug demand reduction and treatment. Among the results to be achieved are the reduction in cannabis production and the strengthening of mechanisms to fight trafficking in drugs and other goods; improvement of authorities' control of national borders; strengthening of the legal and institutional anti-corruption framework in the State administration; improvement of prison conditions; and drug demand reduction and the provision of treatment to drug abusers.

UNODC Regional Office for Brazil and the Southern Cone