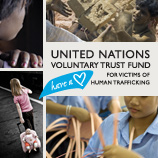 18 October 2011 - The United Nations Voluntary Trust Fund for Victims of Human Trafficking, managed by UNODC, has announced the release of its first tranche of funding for frontline organizations working with survivors of human trafficking. Some $300,000 will be disbursed under the 2011 Small Grants Facility to organizations around the world working at the forefront of services provided to trafficking victims.

The 12 projects selected for the first year of the Small Grants Facility cover all major regions of the world. Projects based on received funding are set to be rolled out in Albania, Cambodia, Costa Rica, the Czech Republic, France, India, Israel, Kenya, Nepal, Nigeria, the Republic of Moldova and the United States.

Yury Fedotov, UNODC Executive Director, welcomed this first disbursement but called for heightened financial support for the Trust Fund: "A unique approach is being employed by the United Nations to channel severely needed funds to survivors of the horrific crime of human trafficking. There is a critical need for increased donations so that we can step up this assistance. There is no place for human trafficking in the world and the Small Grants Facility has a role to play in eradicating this inhumane act."

Projects run from ten months to three years and the funding provides support in several areas, with the ultimate aim of empowering trafficking victims to regain their future. The services provided include legal support to allow victims to seek justice against those who enslaved them; facilities where victims can register for identity documents and make arrangements to return home; and much-needed counselling, training and support to ensure that victims are in a position to rebuild their lives.

The 12 recipient organizations reflect a cross-section of work being carried out in the global fight against human trafficking. The following are the successful organizations (full details of each project are available online at www.unodc.org/humantraffickingfund):

The Trust Fund was formed in late 2010 following the adoption of a United Nations General Assembly resolution to step up global efforts to combat human trafficking, particularly from a survivor-centred perspective. The Trust Fund supports on-the-ground organizations and offers Governments, the private sector, international and non-governmental organizations and individuals the opportunity to work together to help victims of that crime in a practical and tangible manner. The Trust Fund, which is administered by a Board of Trustees representing different regions of the world, accepts donations of any amount, which are used to support organizations such as the recipients of grants under the 2011 Small Grants Facility.