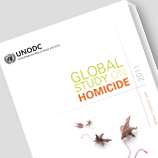 6 October 2011 - UNODC has released its first Global Study on Homicide, which shows that young men, particularly in Central and South America, the Caribbean and Central and Southern Africa, are at greatest risk of falling victim to intentional homicide but that women are at greatest risk of murder owing to domestic violence. There is evidence of rising homicide rates in Central America and the Caribbean, which are "near crisis point", according to the Study.

Firearms are behind rising murder rates in those regions, where almost three quarters of all homicides are committed with guns, compared to 21 per cent in Europe. Men face a much higher risk of violent death (11.9 per 100,000 persons) than women (2.6 per 100,000 persons), although there are variations between countries and regions. In countries with high murder rates, especially involving firearms, such as in Central America, 2 per cent of males aged 20 will be killed before they reach the age of 31 - a rate several hundred times higher than that in some parts of Asia.

Link between crime and development

The Study also establishes a clear link between crime and development: countries with wide income disparities are four times more likely to be afflicted by violent crime than more equitable societies. Conversely, economic growth seems to stem that tide, as the past 15 years in South America have shown.

High levels of crime are both a major cause and a result of poverty, insecurity and underdevelopment. Crime drives away business, erodes human capital and destabilizes society. Targeted actions are needed. "To achieve the Millennium Development Goals, crime prevention policies should be combined with economic and social development and democratic governance based on the rule of law," says UNODC Executive Director Yury Fedotov.

According to the Study, sudden dips in the economy can drive up homicide rates. In selected countries, more murders occurred during the financial crisis of 2008 and 2009, coinciding with declining gross domestic product (GDP), a higher consumer price index and greater unemployment.

In 2010, 42 per cent of homicides were committed using firearms (74 per cent in the Americas and 21 per cent in Europe). Gun crime is driving violent crime in Central America and the Caribbean, the only region where the evidence points to rising homicide rates. "It is crucial that measures to prevent crime should include policies aimed at the ratification and implementation of the Firearms Protocol", said Mr. Fedotov, referring to the Protocol against the Illicit Manufacturing of and Trafficking in Firearms, Their Parts and Components and Ammunition, supplementing the United Nations Convention against Transnational Organized Crime. He added that adoption of the Protocol's provisions could help to prevent the diversion of firearms, which fuels violence and increases the number of homicides.

Organized crime, especially drug trafficking, accounted for a quarter of deaths caused by firearms in the Americas, but only some 5 per cent of homicides in Asia and Europe (based on available data). That does not mean, however, that organized crime groups are not active in those two regions, but rather that they may be operating in ways that do not involve lethal violence to the same extent.

Crime and violence are strongly associated with large youth populations, especially in developing countries. While 6.9 persons per 100,000 are killed globally each year, the rate among young males is three times higher (21.1 per 100,000 persons). Young men are more likely to own weapons, engage in street crime, take part in gang warfare and commit drug-related offences. The number of homicides committed in cities may be three times higher than in less populated areas.

Globally, some 80 per cent of victims and perpetrators of homicide are men. However, whereas men are likelier to be killed in a public place, female victims are murdered mainly at home, as is the case in Europe, where half of all female victims were killed by a family member. The overwhelming majority of victims of violence committed by partners and family members are women. In Europe, for example, women accounted for almost 80 per cent of the total number of persons killed by a current or former partner in 2008.