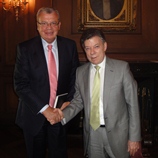 27 September 2011 - Yury Fedotov, Executive Director of the United Nations Office on Drugs and Crime (UNODC), has praised Colombia for demonstrating strong political will to counter transnational threats. On his first visit to that country, he thanked the President of Colombia, Juan Manuel Santos, for his Government's generous funding for UNODC technical assistance projects in the area of illicit drugs, crime and terrorism prevention. That contribution, combined with contributions made by other donors, is worth around $250 million.

Those efforts have paid off. Ten years ago, Colombia was by far the world's leading producer of cocaine; now its share in such production has shrunk significantly. Its economic growth in the past decade shows a distinct correlation between increased national security and a declining drug economy.

"Colombia's progress in drastically reducing drug production has had a positive global impact in terms of security and public health. UNODC is prepared to continue to support Colombia in addressing existing and future challenges relating to drugs and crime," said Mr. Fedotov.

Accompanied by Ambassador Freddy Padilla de León, Permanent Representative of Colombia to the United Nations Office at Vienna, throughout his trip, Mr. Fedotov visited Antioquia Department, where many alternative development programmes are under implementation. He commended those successful efforts, which have helped to wean poor farmers off coca bush cultivation by encouraging them to pursue legal livelihoods.

Programmes supported by UNODC have helped more than 150,000 farmers to switch from trade on illicit markets to gainful employment by creating more than 28,000 jobs and 600 rural enterprises. As a result, competitive and high-quality products worth $40 million (coffee, cocoa, palm heart, chocolate, honey and legal cash crops) have been sold through national and international supermarket chains.

By pioneering the Forest Warden Families Programme, Colombia has made more than 4 million hectares - an area the size of the Netherlands - "drug-free". Those efforts may also help to mitigate climate change - a gram of cocaine destroys four square metres of unspoiled rainforest, but restored forests have captured some 75 million tons of carbon.

"Consumer countries must do their part too and reduce the demand that drives the drug trade, trafficking and violent crime," he said. "This is a matter for all of us. I urge the international community to keep up support for Colombia, which has shouldered so much of the burden of drug-related crime and terrorism in the past."

The Executive Director also witnessed the latest methods employed by the Colombian navy to control maritime smuggling. "By their actions, Colombia's naval and coastguard officers are helping to keep drugs off our streets and to prevent them from harming consumers," he observed.

He also commended Colombia for playing a leading role in combating human trafficking. UNODC is helping to implement a successful project to combat trafficking in persons in Colombia that has led to the enactment of new anti-trafficking laws.

UNODC enjoys cooperation with the private sector and the media, for example, Caracol TV, which is filming a series on trafficking in persons in which the role of UNODC is acknowledged. The Executive Director will sign a letter of intent to cement collaboration with Caracol in preventing such trafficking, including through the promotion of the Blue Heart campaign, a global UNODC awareness campaign that also helps to raise funds for victims of human trafficking.

"Colombia has much knowledge to offer countries - in the region and beyond - on drug trafficking, human trafficking, alternative development, money-laundering, anti-kidnapping and sound monetary policies," Mr. Fedotov told the President.