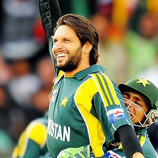 Both batsman and bowler, Afridi is a talented all-rounder who from 2009 to 2011 was captain of the Pakistan national cricket team in various formats of the modern game.

He became an overnight sensation in 1996 when, as a 16-year-old, he made history by scoring the fastest century in a one-day international (ODI) in his very first innings. "Boom-boom Afridi", as he is affectionately known to his legions of fans, goes all-out for runs instead of contenting himself with defending his wicket.

"He plays with heart," said Jeremy Douglas, UNODC Representative in Pakistan, of the appointment. "Shahid Afridi is a role model who can speak powerfully against drug abuse. Young people see in him the courage to push away boundaries and the will to go on when things get tough."

"I have never done anything by halves and I will give my all to my new role of National Goodwill Ambassador. I hate to see drugs ruin the lives of young people. If I can convince just one boy or girl to turn away from drugs I will be proud," said Mr. Afridi on accepting his two-year assignment.

Mr. Afridi will promote healthy living though sports and emphasize positive values and attitudes during visits to schools and colleges. In 2012, he will witness the impact of the work of UNODC in Pakistan and highlight the need to curb drug abuse and associated crime.  He is expected to take part in a range of activities, such as a youth cricket tournament; the marking of International Day against Drug Abuse (26 June); raising awareness of the importance of ethics in sports; advocating gender-responsive services for drug abusers; and promoting  knowledge of drug-related and HIV/AIDS issues.

Shahid Afridi has roots in Khyber Pakhtoonkhwa Province and lives in Karachi. He has played 27 tests, 325 ODIs and 43 Twenty 20 internationals and holds the distinction of having hit the most sixes in the history of ODI cricket. In 2011, Afridi led the national team to the semi-final of the Cricket World Cup and in 2012 he will play various ODI and Twenty-20 fixtures.

Mr. Afridi has been involved in humanitarian efforts in the past, including efforts supporting the emergency response after the catastrophic flood that hit Pakistan in 2010.