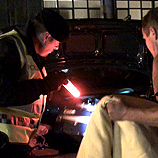 Mr. Fedotov was in the country to observe the measures Albania is undertaking to fight crime and to discuss the possibility of deepening its cooperation with UNODC.

"We are seeking close cooperation with other countries along the heroin chain. We need to sever the arteries of illicit drug trafficking that provides the estimated US$2 billion per year to organized crime groups in the Balkan region," said Mr. Fedotov.

Contributing to this goal, noted Mr. Fedotov, is the recently launched 2012-2015 UNODC Regional Programme for South Eastern Europe. The programme will provide a prime opportunity to increase the coordination of efforts to fight drug trafficking and organized crime in the region.

"Our overall approach is to build political commitment at the highest levels, and to work with partners and other UN agencies to deliver practical solutions on the ground," he said, adding that UNODC had unique comparative advantages in bringing together partners from the East and from the West. Only joint intra- and interregional cooperation would allow for an effective curbing of drug trafficking from Afghanistan.

Albania is a transit country for Afghan heroin smuggled to Western Europe; it also serves as one of the main gateways for heroin distribution throughout Europe. UNODC estimates that in 2009 about 60 tons of heroin, with a market value of approximately US$13 billion, were smuggled through South-Eastern Europe.

Mr. Fedotov announced that UNODC and the World Customs Organization would work to establish operational units for their joint Container Control Programme in the port of Durres, Albania and in the port of Bar in Montenegro to improve inspection of sea containers that could be used to smuggle drugs from Afghanistan and traffic other illicit goods. Albania and Montenegro are the first countries to join the programme in South Eastern Europe.

"We hope that we can connect all countries along the route within the next 2 years; we shall also develop operational cooperation between the container ports around Afghanistan and Pakistan with those in the Balkan region," said Mr. Fedotov.

Mr. Fedotov recognized the efforts that Albania had made so far to curb illicit trafficking and organized crime, such as the notable increase since 2006 in drug seizures, particularly heroin, the arrests of persons for drug-related offences and the setting up in March of a new drug dependence treatment centre in Tirana.