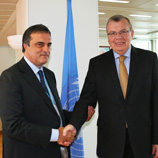 12 March 2012 - The Government of Brazil has pledged to make an annual contribution of $2.5 million towards the running of the UNODC office in Brasilia.

The Minister of Justice of Brazil, José Eduardo Cardozo, announced last Friday at a meeting with UNODC chief Yury Fedotov that the contribution for this year would be available immediately, noting that the planned transformation of the office to extend cooperation in the region would provide benefits beyond Brazil and throughout South America.

Mr. Cardozo added: "Brazil shares 16,000 kilometres of land borders with ten South American countries which are naturally difficult to monitor, due to the variety of its physical conditions. Brazil feels that UNODC should strengthen its role in fostering the capacities of Government bodies to identify, monitor, fight and prosecute drug and organized criminal networks, thus promoting stronger regional cooperation for this purpose."

Brazil is one of the pilot countries where UNODC is reviewing its formula of technical assistance delivery within the framework of relevant international conventions on drugs and crime to take into account the increasingly changing needs of the country and the region.

As part of that process, the UNODC office in Brazil will be transformed into a liaison and partnership office. The new office will be governed by the following pillars: advocacy, visibility, partnership-building and resource mobilization; research and threat analysis; advisory work and operational training with Government counterparts; and programme development and management.

Mr. Fedotov said: "UNODC appreciates the long-lasting support that the Government of Brazil has given to the organization and we look forward to enlarging this partnership."

UNODC and the Government of Brazil will work closely to ensure a smooth transition, including through the finalization of the host country agreement and relevant funding arrangements. The new office will be inaugurated in the last trimester of 2012 by Minister Cardozo, other high-level Brazilian authorities and Mr. Fedotov.

This new approach entails increased national co-funding of the office to support its key functions. The host Government will be expected to provide the bulk of resources required for the operations and essential services of the office and to fund or co-finance agreed programmes implemented jointly in the host country, or between the host country and other countries.

Since 1991, UNODC has been supporting the Government of Brazil in countering organized crime and drugs. Brazil has ratified the United Nations Convention against Transnational Organized Crime and its three Protocols (against trafficking in persons, smuggling of migrants and trafficking in firearms), the United Nations Convention on Corruption and all three international drug control conventions.

The standard delivery of UNODC technical assistance through regional, country or programme offices is currently under review in several other countries which have the expertise, resources and standing to move from a typical donor-beneficiary relationship to true partnership. Those countries include China, India, Mexico and the Russian Federation.