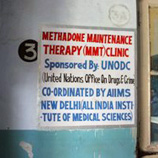 5 March 2012 - UNODC, in collaboration with the National Drug Dependence Treatment Centre of India, has opened the country's first methadone maintenance treatment centre at the Civil Hospital in Kapurthala, in the State of Punjab, to treat heroin and opioid addicts.

The methadone maintenance treatment project is part of a pilot UNODC initiative that will see the opening of four more centres in Bathinda, Mumbai, Imphal and Delhi during the course of this year.

At the centre, injecting drug abusers will be given methadone in syrup form daily and will receive psychosocial support, including counselling. The project is aimed at providing treatment to 350 people dependent on heroin or opioids for a period of one year under the UNODC programme, which will be later handed over to the National AIDS Control Organisation.

"Drug dependence, commonly referred to as addiction, is a chronic relapsing condition similar to other non-communicable diseases like hypertension or diabetes which requires long-term treatment with medicines," said Cristina Albertin, UNODC Regional Representative for South Asia, in her opening remarks at the launch of the treatment centre. "The opening of these centres marks an important step towards our collaboration with the Indian Government to effectively address heroin or opioid dependence in the country by coming up with responses that have been known to work in other countries," she added.

Methadone is the most extensively used medication for long-term treatment for those dependent on heroin or opioids. Extensive research has shown that methadone maintenance treatment significantly reduces drug abuse and the transmission of HIV and hepatitis B and C among drug abusers. Such treatment also helps drug abusers to restore their psychological balance so that they can become productive members of society again. Worldwide, approximately 70 countries employ opioid agonist treatment for opioid abusers, of which 48 use methadone treatment, serving more than one million individuals.

While buprenorphine, another long-term medication, is already available in under the National AIDS Control Programme, methadone, with its demonstrated effectiveness, will add to the options available for treating opioid dependence. The programme will document the process of implementation of methadone maintenance treatment and develop practice guidelines and an action plan for scaling up such treatment in India.

The initiative is being implemented as part of a UNODC project to prevent the transmission of HIV among drug abusers in member States of the South Asian Association for Regional Cooperation (Bangladesh, Bhutan, India, Maldives, Nepal, Pakistan and Sri Lanka), with funding support from the Australian Agency for International Development (AusAID), the Joint United Nations Programme on HIV/AIDS (UNAIDS) and GIZ, the German development organization.