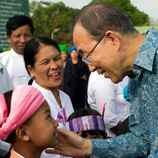 4 May 2012 - Secretary-General Ban Ki-moon, on an official visit to Myanmar this week, witnessed firsthand the efforts undertaken by UNODC and the Government of Myanmar to support alternative development projects for the country's opium poppy farmers.  As part of his visit, the Secretary-General travelled to the southern Shan village of Kyauk Ka Cha to highlight the importance of addressing the relationship between food insecurity, poverty, poppy cultivation and armed conflict.

There has been a clear link between poppy cultivation and insecurity in Shan State, so addressing it is necessary if support is to be developed for the promising peacebuilding process that is so important to the future of Myanmar.

Speaking to local officials following the distribution of rice donated by the United Nations, Mr. Ban said: "I welcome the cooperation between Myanmar and UNODC in delivering alternative development assistance to poppy farmers. The scale of the need is great, and available resources are insufficient. I will be encouraging United Nations Member States to contribute to these programmes in support of the people of Shan."

UNODC Regional Representative for East Asia and the Pacific Gary Lewis said: "To support the development of peace and security in Shan State, we must banish the illicit drug economy on which so much insecurity rests."

UNODC estimates that 246,000 households are involved in opium cultivation in Myanmar, with 91 per cent of opium cultivation occurring in Shan State. Government poppy eradication efforts have reportedly increased fourfold in the growing season that has just ended, but eradication has also increased food insecurity, as communities dependent on income from now-destroyed poppy scramble to feed their families.

Opium poppy farmers in Myanmar require legitimate income-generating opportunities, without which they will fall back on the lucrative cash crop. UNODC currently operates three alternative development projects in southern Shan State to help reduce opium poppy production by providing alternative income-earning and livelihood opportunities. The amount involved is a modest US$7 million, spread over four years and provided directly to communities on the ground. The projects, funded by the European Union and the Government of Germany, include rice assistance provided in partnership with the World Food Programme.

Myanmar is the world's second-largest opium poppy grower after Afghanistan, accounting for 23 per cent of opium poppy cultivation worldwide in 2011. Poppy grows throughout Shan State; however, the areas with highest cultivation intensity are in and around areas of conflict between government and ethnic forces.