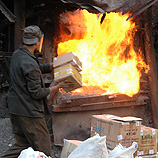 1 June 2012 -  UNODC Executive Director, Yury Fedotov, attended a celebration today in the Tajik capital of Dushanbe to mark the 13th anniversary of the Tajikistan Drug Control Agency. The ceremony was led by the head of the Agency, Lt. Gen. Rustam Nazarov, and also attended by Lt. Gen. Beksultan Sarsekov, Director of the Central Asian Regional Information and Coordination Centre.

Created in 2000 through joint efforts by the Government of Tajikistan and UNODC, the Agency supports law enforcement and provides capacity-building, policy and legislative advice to Government institutions as part of efforts to combat drug trafficking.

The Agency has been instrumental in stemming the flow of opiates from Afghanistan via Central Asia and the Russian Federation to Europe. In the 13 years since it was formed, more than 14 tons of drugs have been destroyed and the coordination of activities between both national and international agencies has greatly improved. The Agency has provided information leading to numerous regional drug control actions.

In addition to drug seizures, the Agency has been helping to increase the knowledge and capacity of institutions to deal with drug trafficking. In 2004, it set up an analytical centre to assist operational and investigation departments in ongoing operations. A mobile units department was established and incorporated into the Agency's structure in 2006, and two new mobile unit offices were inaugurated in the eastern part of Tajikistan (Ishkashim and Murgab) in 2011.

The Agency has entered into collaborative agreements with law enforcement bodies and special services in Afghanistan, China, the Islamic Republic of Iran, Kazakhstan, Kyrgyzstan, the Russian Federation, Ukraine and Uzbekistan. Additionally, three fully operational liaison offices were established in northern Afghanistan (in Kunduz, Takhor and Badakhshan).

In a related development, the Agency today destroyed 267 kg of drugs in the presence of Mr. Fedotov, officials from Afghanistan, Kyrgyzstan and Tajikistan, and international donors. The haul included 17 kg of heroin and 239 kg of opium, all of which originated from Afghanistan.

As part of his visit to Central Asia, Mr. Fedotov also attended the Ministerial Meeting of the UNODC-supported AKT Tripartite Initiative, which brings together leading authorities in drug control from Afghanistan, Kyrgyzstan and Tajikistan, and represents a further positive step in coordinating regional responses to drug trafficking