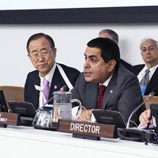 17 May 2012 - Senior United Nations officials yesterday drew the world's attention to threats posed by transnational organized crime and drug trafficking in Central America and called for concerted global efforts to combat the scourge, which they said was spreading to other regions.

The debate was aimed at highlighting the individual and collective fight of Central American Governments against transnational organized crime, the focus on that subject in the framework of United Nations policies and actions and the importance of cooperation with, and the support of, the donor community. In June last year, the region's Heads of State adopted a Central American regional security strategy.

In his opening remarks, Secretary-General Ban Ki-moon said: "Caught between drug-producing countries in the South and some of the major consumer countries in the North, proximity has encouraged criminality in the region."

Mr. Ban noted that the narcotics problem was not confined to Central America, pointing out that the region was a "bridge" to North America and that the Americas were, in general, a "staging post" for Europe, through trafficking routes in West and Central Africa.

"All of this underscores the need to go beyond a regional approach. Our world is interconnected. Our challenges are linked. Our solutions must be, too," said Mr. Ban. "That is why, last year, I established the task force on transnational organized crime and drug trafficking. Our approach is rooted in the rule of law and respect for human rights."

The task force was set up in March 2011 to integrate responses to transnational organized crime into United Nations activities relating to peacekeeping, peacebuilding, security and development, with UNODC and the Department of Political Affairs as co-chairs.

In his message to the thematic debate, UNODC Executive Director Yury Fedotov said that the multifaceted, interconnected nature of drugs and crime called for interregional approaches.

To help counter the threat of drugs and crime in Central America, Mr. Fedotov announced that UNODC had created a regional hub in Panama for Central America and the Caribbean which would link with a reprofiled office in Mexico and other countries in the region.

At the tactical level, Mr. Fedotov said that UNODC was establishing centres of excellence in Mexico on public security statistics and in the Dominican Republic on prison reform and drug demand reduction. The Government of Panama, with the technical support of UNODC, had also established a regional anti-corruption academy.

Mr. Fedotov announced that UNODC would soon release a threat assessment for the region to improve understanding of the situation in Central America and the Caribbean.