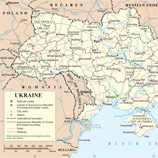 21 May 2012 - UNODC Executive Director Yury Fedotov has begun a two-day official visit to Ukraine, his first to that country. While in the capital city of Kyiv, Mr. Fedotov met the Speaker of the House, Vladimir Litvin, and other officials of the Ukrainian Government.

Mr. Fedotov invited the Government of Ukraine to make the fullest use of the expertise of UNODC, which could work as a partner in the implementation of European Union projects aimed at drug control and other mandated areas.

In Kyiv, Mr. Fedotov participated in a conference hosted jointly by the State Service of Ukraine on Drug Control and UNODC to discuss evidence-based drug dependence treatment and care for drug users. Ukraine is home to an estimated 290,000 opiate users and has one of the world's highest rates of HIV prevalence among injecting drug users.  Injecting opiate use is linked to 60-70 per cent of all HIV infections in the country.

"UNODC is ready to provide support and technical assistance to Ukraine for the development of a comprehensive drug dependence treatment and care system in which evidence-based psychosocial and pharmacological treatment interventions, including methadone maintenance treatment, are available," said Mr. Fedotov, calling for more support to be given to those programmes.

Mr. Fedotov thanked the Government for supporting the activities of the UNODC Programme Office in Ukraine and for its close cooperation in the implementation of the UNODC regional project on HIV/AIDS prevention and care among vulnerable groups in not only Ukraine but also other parts of Eastern Europe and Central Asia.

In a meeting with Mr. Vladimir Timoshenko, Head of the State Service on Drug Control, Mr. Fedotov acknowledged the importance of the new national anti-drug strategy. Ukraine is a transit country for Afghan heroin smuggled to Western Europe, and UNODC has stressed the need to boost the operational capability of Ukrainian border guards with equipment and know-how. The Executive Director said UNODC could assist the Government in implementing the strategy and further strengthening the counter-narcotics capacity of the country.

Mr. Fedotov highlighted that UNODC and the World Customs Organization would work to establish operational units for their joint Container Control Programme in the Black Sea area, in Armenia, Georgia, the Republic of Moldova and Ukraine. The units would help to improve the sharing of  information in the region and enhance coordination in the inspection of sea containers that could be used for smuggling drugs from Afghanistan.

Mr. Fedotov said that UNODC would be happy to provide legal assistance and capacity-building to criminal justice officials, including in the area of terrorist financing, victim protection and countering the use of the Internet for terrorist purposes. He commended Ukraine for ratifying 14 international legal instruments to counter terrorism, noting that the Government had incorporated relevant provisions of those instruments into national legislation.  Ukraine, he acknowledged, had also ratified the United Nations Convention against Transnational Organized Crime, and he called on the country to support technical assistance to fight human trafficking and the smuggling of migrants.