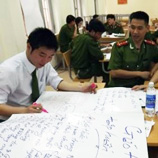 8 May 2012 - One third of married women in Viet Nam have been victims of domestic violence, according to a national study by the General Statistics Office of Viet Nam and the World Health Organization.

Recognizing that police officers are at the forefront of the justice system's efforts to prevent domestic violence and protect victims, UNODC and Vietnamese experts are developing a domestic violence prevention training module for police, to be used at the national People's Police Academy of Viet Nam.

In April 2012, 20 Police Academy lecturers were trained on how to teach police officers using the new domestic violence module, which will be officially released in June.

Based on existing UNODC training materials but adapted to the specific needs of the Police Academy, the interactive training module allows participants to prepare lessons and carry out practical exercises based on the module's guidelines.

The training materials have been approved by the Ministry of Public Security and the Ministry of Justice of Viet Nam and were extensively used during 13 UNODC-supported training courses held in four pilot provinces of local first responders. Since 2010, up to 700 local law enforcement officers, members of the Women's Union, social workers, court personnel and prosecutors have been trained in the four provinces.

In the second half of 2012, UNODC Viet Nam plans to introduce the training module into the training curricula of the People's Police University in Ho Chi Minh City, the only other police academy in the country.

In 2010, UNODC released the Handbook on effective police responses to violence against women. The Handbook is designed to assist and guide police officers in the prevention of, and response to, violence against women. While it  can be applied globally, the Handbook is designed primarily for use by police in developing countries and countries in transition, where institutional means to protect women from violence have not yet been created or implemented.