On the menu in the Bahamas: Wendy's restaurants fight human trafficking 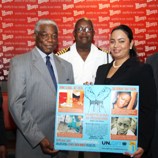 30 May 2012 - Wendy's Bahamas, a franchise of the Wendy's international fast food chain, has joined the Global Initiative to Fight Human Trafficking (UN.GIFT) and the new Bahamas National Task Force on Trafficking in Persons to launch a unique "anti-trafficking in persons" tray liner in its 10 restaurants in Nassau and Grand Bahama.

For a month, all Wendy's Bahamas restaurants will serve food on tray liners that explain to people the different forms of human trafficking, including for forced labour, domestic servitude, female sexual exploitation and the exploitation of children.

The idea is to encourage the public to take action by speaking up and reporting suspected cases of human trafficking to the police or the local crisis centre using the 24-hour telephone numbers listed on each tray liner.

Speaking at a press conference to launch the tray liners on 21 May, the Minister of National Security of the Bahamas, Dr. Bernard Nottage, noted that the Government's participation in the exercise was part of the national campaign, as well as the wider global campaign, to counter human trafficking.

The Minister called on the public to be aware of this crime, and commended the local Wendy's franchise for setting "an excellent example of good corporate citizenship and effective Government and private sector partnership to address matters of national, critical concern."

Until 2011, no traffickers had been prosecuted in the Bahamas. The National Task Force on Trafficking in Persons, launched in April 2012, aims to enhance local efforts to combat trafficking, to identify and protect victims, and to facilitate the prosecution of traffickers.

UN.GIFT was launched in 2007 to promote the global fight against human trafficking, on the basis of international agreements reached at the United Nations. The initiative aims to create synergies among the anti-trafficking activities of United Nations agencies, international organizations and other stakeholders to develop the most efficient and cost-effective tools and good practices against this crime.