Piracy in East Africa: How the Seychelles works to tackle a global issue 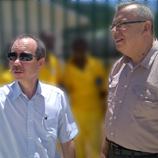 16 November 2012 - Piracy in the Gulf of Aden and the waters along the Eastern Africa coastline has had a harmful effect on many areas both locally and globally. While the movement of international freight through this strategic location has been harmed, the everyday livelihoods of millions of locals have also suffered.

Discussing this with officials in the Seychelles during a series of meetings in the region, Yury Fedotov, Executive Director of UNODC, acknowledged the impact that piracy has had on the Seychelles - particularly in key sectors such as tourism and fishing. Speaking with Joel Morgan, the Seychelles Minister of Home Affairs, Mr. Fedotov expressed his appreciation to the Government for their support in tackling this regional concern and reaffirmed UNODC's commitment to assisting the country.

During his trip Mr. Fedotov also visited Montagne Posee Prison - one of the 11 prisons that the UNODC Counter-Piracy Programme works with in the region. Montagne Posee is the Seychelles largest prison and one which currently holds 101 of the country's 105 suspected or convicted pirates held in the country.

As part of the joint UNODC/prison service work at Montagne Posee, a number of substantial improvements have been made recently. A new 60-bed prisoner unit has been constructed as has an exercise yard to ensure prisoners get the exercise required by the United Nations Standard Minimum Rules for the Treatment of Prisoners. UNODC has also been involved in other areas of refurbishment, staff training and the provision of educational and other equipment. In response to the high rate of foreign prisoners at Montagne Posee, the organization has been assisting the Seychelles authorities in the transfer of prisoners back to Somaliland and Puntland where they are able to serve out their sentences in their home countries.

Since its establishment in 2009, the UNODC Counter-Piracy Programme has worked extensively with police, prosecutors, courts and the prison system in a number of ways. Mentoring and training in criminal investigations, the provision of investigative and other equipment, and interpretation services are three examples of this work with the police services. In the prisons, UNODC has been involved in training techniques and the refurbishment of facilities and equipment. Prosecutors have also gained from the provision of legal research resources and material, equipment and training in criminal case management, while the court systems in various regional prosecuting countries have been assisted through the funding of defence lawyers, the provision of trial interpretation and transcription and other means.