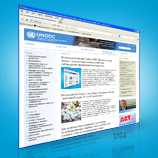 29 November 2012 - UNODC has today launched its Russian website. Our Russian-speaking web visitors can now find information about the work of UNODC more easily.

As one of the six official languages of the United Nations, Russian is the most geographically widespread language of Eurasia and the most widely spoken of the Slavic languages. Estimates show that there are several hundred million people in Russia, countries of the Commonwealth of Independent States (CIS) and around the world, who use Russian as their mother tongue or as a secondary language.

Through the Russian language, some of the world's foremost novelists, poets and playwrights -  including Pushkin, Lermontov, Gogol, Tolstoy, Dostoevsky, Turgenev, Chekov, Pasternak, Bulgakov, Nabokov and Solzhenitsyn -  have contributed to literature and human thought.

Mr. Fedotov acknowledged the strong and enduring support of the Russian Federation to his Office in fulfilment of its programmes and projects, including in the CIS region and the Regional Programme for Afghanistan and its Neighbouring Countries.  In 2011, the Russian Federation made an important pledge of US$7 million in voluntary funding for 2010 and also established an annual contribution level of US$ 2 million starting with 2011. These contributions have helped bolster the work of UNODC as the main United Nations body responsible for countering the complex challenges of organized crime, drug trafficking and international terrorism, the Executive Director noted.

The Permanent Representative of the Russian Federation to the United Nations and other international organizations in Vienna, Mr. Vladimir Voronkov said: "The Government of Russia is committed to further reinforcing fruitful cooperation with the UN Office in Vienna, UNODC and the international community for the purpose of strengthening the principle of the multilingualism in the UN, including greater use of the Russian language, which was and remains one of the priorities of Russia here in the UN Office in Vienna".