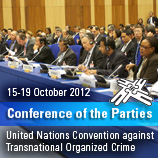 2 October 2012 - Progress in international efforts to address transnational organized crime will be the focus of the sixth session of the Conference of the Parties to the United Nations Convention on Transnational Organized Crime, to be held in Vienna from 15 to 19 October.

Ministers and officials from Member States will address a wide range of organized crime-related issues requiring effective legal responses, law enforcement and criminal justice, including new and emerging issues such as trafficking in cultural property and cybercrime.

Throughout the session, a programme of side events will be open to the press, including the launch of the Small Arms Survey 2012, a digest of organized crime cases and three handbooks on international judicial cooperation, and an event on learning from victims of crime. A variety of discussions will take place, such as on the contribution of non-governmental organizations to strengthening counter-trafficking operations and the vulnerability of migrant workers to trafficking in persons.

The Convention, together with its protocols on trafficking in persons and firearms and the smuggling of migrants, forms the legal basis for international cooperation in combating serious transnational organized crime. So far, 172 States and the European Union have ratified the instrument, which represents a powerful tool for cooperation against criminal gangs, their ringleaders and networks operating worldwide.

The Conference of the Parties to the Convention was established to improve the capacity of States Parties to combat transnational organized crime and to promote and review the implementation of the Convention.

The agenda is available at www.unodc.org.