Smuggling of migrants generates billions of dollars each year for criminals 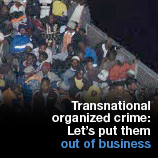 6 September 2012 - Each year, criminals are estimated to generate around $6.75 billion from the smuggling of migrants along just two of the principal routes used for such smuggling, namely from East, North and West Africa to Europe and from South America to North America. As a form of transnational organized crime, the smuggling of migrants is the subject of a new campaign by the United Nations Office on Drugs and Crime (UNODC).

Information on the awareness campaign, which aims to draw attention to the various aspects of transnational organized crime, can be found at www.unodc.org/toc and includes a video which is being made available at www.youtube.com/unodc) and through international broadcasters. The web page and video illustrate the key financial and social costs behind organized crime, including those concerning the smuggling of migrants. The campaign page includes a dedicated section and fact sheet on the smuggling of migrants, available at www.unodc.org/toc/en/crimes/migrant-smuggling.html.

"Smuggling of migrants" refers to the facilitation of illegal border crossings or of illegal residence in a country with the aim of making a financial or other material profit. Migrants are often smuggled by organized criminal networks that exploit the lack of legal migration opportunities available to migrants seeking a better life. As legal immigration channels become more limited, an increasing number of people seek the assistance of smugglers, who take increasingly risky measures to circumvent border controls. Since the smuggling of migrants is a highly profitable illicit activity with a relatively low risk of detection, it has proven attractive to criminals.

Evidence indicates that smugglers are becoming more and more organized, establishing professional networks that transcend borders and encompass all regions. As with other forms of organized crime, the groups concerned have increased their operations by shifting routes in a bid to expand into other markets.

Smuggling routes may originate and end on the same continent, be transcontinental or involve transit through a third continent. In the Americas, an estimated three million illegal migrants enter the United States of America from Latin America each year, which generates an annual income of about $6.6 billion for the criminals involved. Some 55,000 migrants are thought to be smuggled between East, North and West Africa and Europe every year, earning criminals a net profit of $150 million.

As smuggling networks expand, the safety and lives of smuggled migrants continue to be at risk: many suffocate in containers, perish in deserts or drown at sea while being smuggled. Between 1996 and 2011, at least 1,691 people died while attempting desert journeys, and in 2008 alone a further 1,000 deaths occurred as a result of sea crossings.

Besides loss of life and the grave human rights abuses suffered by migrants as they undertake arduous and risky journeys, the smuggling of migrants fuels other forms of organized crime in the countries of origin, transit and destination. Smugglers are known to bribe government or border officials in exchange for documentation, thereby increasing corruption. Smugglers are also known to falsify travel and identity documents both for themselves and for those being smuggled.

The key to combating the smuggling of migrants is to increase international cooperation, reinforce national coordination and ensure that the laws of the countries involved are harmonized in order to close legal loopholes, since the practice is by nature a transnational crime and the smugglers involved operate in networks. In addition, issues of migration and development need to be examined closely in order to better understand the root causes and prevent organized criminal groups from profiting from vulnerable groups.

UNODC also helps States to enact laws criminalizing involvement in the smuggling of migrants and trains law enforcement officers and prosecutors from around the world in how to deal with smuggling cases.

In July 2012, UNODC assumed the chairpersonship of the Global Migration Group, a United Nations inter-agency group bringing together heads of agencies to promote the wider application of all relevant international and regional instruments and standards relating to migration and to encourage the adoption of more coherent, comprehensive and better coordinated approaches to the issue of international migration.

UNODC and the smuggling of migrants