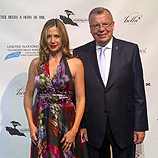 28 September 2012 - UNODC Executive Director Yury Fedotov attended a preview screening of Trade of Innocents, a film that exposes the grim reality of children trafficked for sexual exploitation. The UNODC chief participated at the event in New York with Mira Sorvino, UNODC Goodwill Ambassador against human trafficking, who has a starring role in the film.

Trade of Innocents is set in the seedy brothels of Cambodia and follows the story of an American couple who struggle to overcome the pain of their past loss of a child against the stark realities they encounter of child exploitation in the city where they now live and work.

"I am very proud to be a part of this film, as an actress and UNODC Goodwill Ambassador to combat human trafficking," said Ms. Sorvino. "Most people are unaware that this terrible trade of children for sexual exploitation flourishes both in the United States and around the globe. Trade of Innocents will open their eyes and their hearts, and inspire them to become part of the solution," she added.

The film, which also stars Dermot Mulroney, was inspired by the real-life experiences of an American couple who worked in Phnom Penh, Cambodia, where they encountered seven young girls who had recently been rescued from a brothel. Director Christopher Bessette and the couple decided not only to make a compelling film on a difficult subject, but also to raise awareness about the sexual exploitation of children and to move people to action.

UNODC Executive Director Yury Fedotov praised Ms. Sorvino's work in fighting human trafficking, a crime which earns traffickers an estimated $32 billion annually and which robs people of their dignity and basic rights: "Both with UNODC and on her own, Mira has met with countless victims of trafficking, and she uses her platform as a global personality to tell their powerful stories. We are grateful for Mira's extraordinary commitment and her invaluable assistance to UNODC in our efforts to fight human trafficking. Her work on and off screen has lent a voice to the voiceless," he said.

During the screening dedicated to the UN Trust Fund for Victims of Human Trafficking,  Mr. Fedotov called for increased contributions to the fund to support provision of on-the-ground humanitarian, legal and financial aid to victims of trafficking. Since its establishment, the fund, which is managed by UNODC, has benefitted 11 front-line organizations working with survivors of human trafficking around the world, including Damnok Toek, a local non-governmental organization in Cambodia.

Trade of Innocents will be released in October.