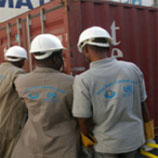 11 April 2013 - The joint UNODC/World Customs Organization Container Control Programme continues to expand. From the four-country pilot start-up phase in 2006, the Programme is now active in 41 countries across the world, and seizure data show its impact very clearly. In 2012 alone, more than 11 tons of cocaine, 17 tons of cannabis and 434 tons of precursor chemicals needed for the production of illicit drugs were seized in ports where the Programme is active. Additionally, there were significant seizures of other contraband, such as cigarettes, endangered species and counterfeit products.

The Programme's success in the past 6 years may have led to a shift in trafficking schemes, routes and ports of choice for traffickers, and its future focus will pay closer attention to such trends. New locations for port control units and other operations will be introduced in additional countries and regions in order to ensure its continued success.

Weak links in law enforcement systems and border management are exploited by transnational organized criminal groups in ports and open seas around the world. Further, today's globalized trade environment poses a number of common challenges to States in containing the illicit flow of goods. These include growing volumes of maritime trade, limited resources and pressure to economize, a wide variety of automated port processes, systems and approaches to law enforcement, inter-agency competition for tangible results, the need to balance law enforcement and trade facilitation, as well as the simplification of procedures.

The Container Control Programme offers an effective solution to countries in coordinating and managing law enforcement responses at sea and dry ports. The Programme supports enhanced, standardized collection and reporting of data on container crime for further strategic analysis and sharing of information. One of its key elements is the concept of national ownership and empowerment. This enables law enforcement agencies in different countries to overcome competitiveness and lack of coordination, and to unite efforts in carrying out risk analysis, profiling and investigations. Capacity-building among law enforcement in several countries within a region, for example - such as in Latin America and the Caribbean - has proven to be a very strong basis for effective international cooperation and networking in order to improve controls and increase the seizures of illicit goods.