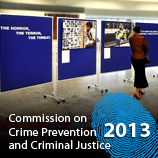 24 April 2013 - On the margins of the Commission on Crime Prevention and Criminal Justice, UNODC's Executive Director, Yury Fedotov, the Spanish Vice-Minister of the Interior, Luis Aguilera, and Maria Del Mar Blanco - sister of a terrorism victim and president of the Victims of Terrorism Foundation in Spain - opened a photo exhibition in remembrance of those who have perished in acts of terrorism in the last decades from all over the world.

"100 Reflections Out of Sorrow" is a powerful photo collection demonstrating the devastation terrorism leaves behind, and it illustrates the suffering of the victims and their families, as well as their solidarity and hope for truth and justice. International intellectuals, including renowned authors Mario Vargas Llosa and Jose Saramango, complement the pictures by describing their impressions and reflecting on the horror of those acts. "These pictures provide a humble tribute to the victims and also serve to remind us of the appalling consequences of terrorism" said Mr. Fedotov at the opening.

"The exhibition is dedicated to the remembrance and support of victims of terrorism from all over the world" he continued. "Victims have long played a secondary, and mostly silent, role in criminal trials." UNODC recognizes the importance of representing victim's interest in criminal proceedings, and the relevance of developing programmes that provide adequate support to victims.

"We are convinced of the key role of victims, which must be part of any strategy for fighting terrorism, with full respect for the rule of law and democracy" said Vice-Minister Luis Aguilera at the opening ceremony.

As a key actor in the global efforts against this crime, UNODC advocates for international instruments to combat terrorism and provides legal technical assistance to Member States to enhance their capacity to prevent and combat all of its forms.

A victim-centered approach is at the core of UNODC's work against terrorism. A significant landmark in these efforts was the General Assembly's adoption of the United Nations Global Counter-Terrorism Strategy in 2006, where Member States, for the first time, acknowledged that an important component in the fight against terrorism is the role of those who suffer most: the victims and their families. Two years later, in December 2011, a further resolution requested UNODC to continue offering specialized legal knowledge and assistance in forming criminal justice responses to terrorism, including the support of victims.

In response to this call, UNODC developed the Handbook on The Criminal Justice Response to Support Victims of Acts of Terrorism - a training tool to assist Member States with tailor-made responses.