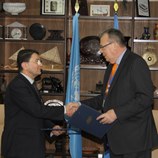 5 April 2013 - In the presence of the UN Secretary-General, Ban Ki-moon, the World Tourism Organization (UNWTO) and the United Nations Office on Drugs and Crime (UNODC) today agreed to launch a new public awareness campaign calling on tourists to help reduce demand for illicit goods and services linked to transnational organized crime.

The joint campaign, to be launched later this year, aims to raise awareness among international tourists about the types of illicit goods and services to which they are often exposed during their travels and which directly or indirectly fund organized crime groups. Travellers can play a key role in reducing demand for these products through ethical consumer choices. The campaign will encourage tourists to make informed decisions and help reduce demand for trafficking in persons, cultural artefacts, wildlife, fauna and flora such as ivory products, as well as counterfeit goods, and illicit drugs. 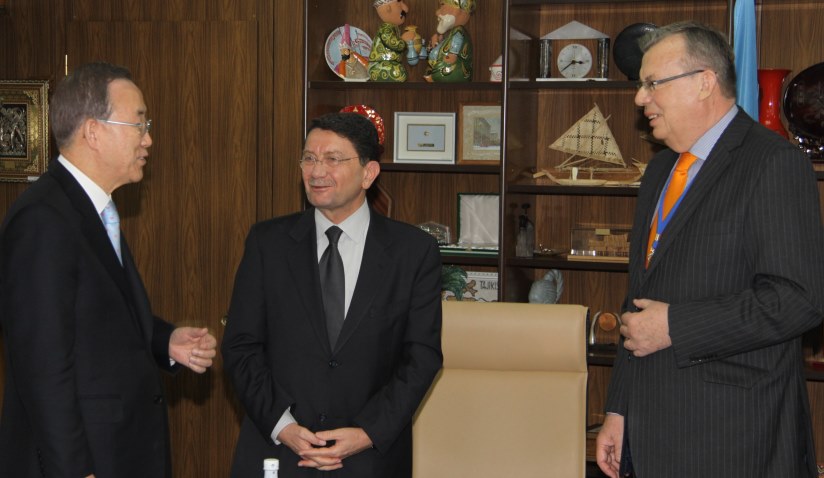 UN Secretary-General Ban Ki-moon commended this innovative joint initiative between the two partner UN Agencies: "The illegal trade in goods and services often funds unscrupulous people involved in human trafficking, the illicit ivory trade and other areas that cause immense suffering and destruction. Well-informed tourists can make a real difference in turning the tide against these criminal acts."

Organized criminal networks generate money wherever there is demand and travellers are often exposed to objects which are illicitly sold. With more than 1 billion tourists now crossing international borders each year, there is a growing opportunity to call on tourists to act and reduce demand for these illicit products which in many cases are providing a funding source for organized crime. The campaign drives the message that while some products may seem harmless, the demand created and their sale can, in fact, have devastating effects on the lives of innocent people, on wildlife or on cultural property. The billions of dollars generated through such trade also fund criminal groups who use this money to branch out into other illicit and unethical lines of business.

"Although the infrastructure of tourism - from accommodation establishments to transportation networks - can be misused by traffickers to victimize the vulnerable, tourism has the potential and is firmly committed to reclaim this same infrastructure and use it in the fight against trafficking" said UNWTO's Secretary-General Taleb Rifai. "Through coordinated efforts, we can ensure that awareness travels - that tourism authorities, travel companies and tourists join us on this fight" he added.

According to the Executive Director of UNODC, Yury Fedotov: "This new awareness-raising campaign will help build awareness about organized crime and the devastating effect it has on people and communities worldwide. Tourists are often exposed to the traffickers of human beings and unethical products. By making informed choices, tourists can help sever the financial arteries that fuel these forms of illicit trade".

The campaign will seek to engage the tourism industry including hotel chains, travel agencies and airlines to lend support in raising awareness among tourists and help contribute to limiting these illicit markets.

The initiative supplements UNWTO's Global Code of Ethics for Tourism. The Code calls upon tourists to behave in a responsible and respectful manner towards the visited destination, urging them not to commit any criminal acts and to refrain from all trafficking in illicit drugs, arms, antiques, protected species, products and substances that are dangerous or prohibited by national regulations.