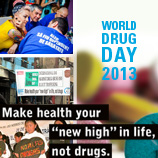 12 August 2013 - Each year on the International Day Against Drug Abuse and Illicit Trafficking - otherwise known as World Drug Day - UNODC offices around the world organize and take part in local events to celebrate the day. As far afield as Africa, Asia, Europe and South America, young people got out and said 'yes' to health and 'no' to illicit drugs. Below is a short selection of just a few of the events that took place on 26 June this year.

Cape Verde: Parades and awareness campaigns across the islands

The country's municipalities celebrated with a wide array of events and activities to mark the annual World Drug Day, including awareness-raising lectures on the role of families in drug use prevention targeted at youth, and a march against substance use attended by over 800 youth, child and adult participants. 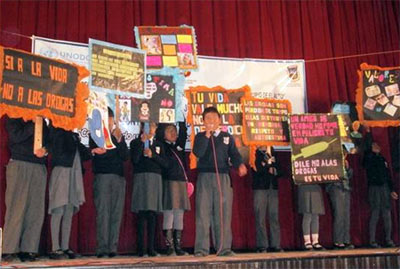 Several villages also participated in a range of cultural and sporting events, while in the capital Praia, a grand event was hosted for the presentation of the preliminary data on the prevalence of psychoactive substance use in secondary schools in the city.

India: Joining together in celebration

In New Delhi, both individuals and organizations were recognized by the President of India for their contribution in the area of substance use prevention at a national ceremony organized by the Ministry of Social Justice and Empowerment. A number of states held awareness-raising programmes for people of various age groups, focusing on topics such as drug use among women and children and the harmful effects of drugs. 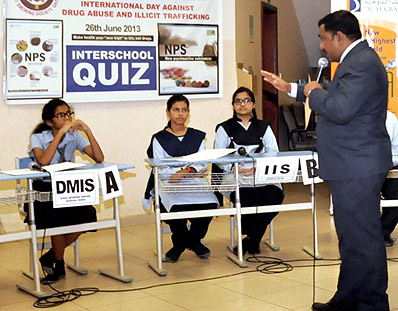 One of the largest events took place in the state of Mizoram, where a state-level programme was organized for over 800 participants, who enjoyed local musical performances featuring songs on the ill effects of drug use, as well as a photo contest facilitated by the Chief Minister. The day was also observed at the state's central and district jails, where 400 inmates joined UNODC organizers in discussing the dangers of illicit substances.

Over 350 participants as well as several civil society movements joined together in a parade in the capital Monrovia to mark World Drug Day 2013. Carrying banners and wearing t-shirts bearing this year's UNODC slogan "Make health your new 'high' in life, not drugs", the march was followed by a programme in the presence of the President of Liberia, Ellen Johnson Sirleaf. 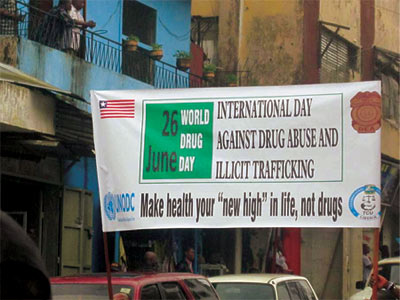 Radio talk shows were also organized by the UN peace-keeping mission UNMIL on its Radio Crime watch program and the National Liberian Radio Station. Additionally, a training course for journalists was held on the role of the media in awareness-raising on transnational organized crime and drug-trafficking in Liberia by UNMIL, INTERPOL and national agencies. A positive outcome was the creation of a network of Journalists against Drugs to enhance media coverage on the topic.

In Chisinau, over 1,200 people gathered to enjoy a free open-air concert aimed at the promotion of a healthy, drug-free lifestyle. The event, Music Is My Drug, was an opportunity for attendees to learn more about the common misconceptions attributed to the music scene in combination with drug use, as well as a chance to advocate for the social inclusion of drug users, including prison inmates. 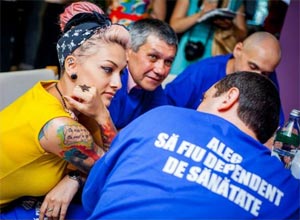 The Anti-Drug Campaign in Moldova also involved prisons and pre-trial detention centres, where a large number of prisoners are still victims of heavy drug use. The campaign organized a quiz called 'Brain Ring', to test the general knowledge of prisoners on issues relating to drug use, HIV, and tuberculosis. In the final round of the game, three teams from prisons competed in a public space in Chisinau. To offer their support, relatives and family members were invited to join the event.

Ukraine: Recommendations by youth for youth

In the Kyiv region, over 40 young Ukrainian people participated in Social Innovation Labs, where they exchanged ideas and drew up recommendations for the improvement of drug prevention efforts among young people in the country. The participants included youth from detention centres, as well as young offenders under police control in alternative penal arrangements. The participants also compiled a list of recommendations addressing teachers, parents and youth workers with the aim of a more equal dialogue between adults and youth in the context of drug prevention.