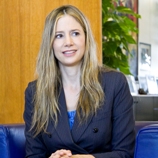 8 February 2013 - Academy Award-winning actress Mira Sorvino visited the Vienna International Centre and agreed to continue in her role as the UNODC Goodwill Ambassador to Combat Human Trafficking. Ms. Sorvino, who has played a very active role in promoting the plight of human trafficking victims since her initial appointment in February 2009, also met with UNODC staff to discuss the latest trends and issues surrounding this multi-billion dollar crime.

"Ms. Sorvino has shown great commitment to the cause of human trafficking", said UNODC Executive Director Yury Fedotov. "We are grateful for her dedication over the past four years in support of UNODC-led initiatives aimed at a variety of audiences - from policy-makers to the creative community to the media - and for the enthusiasm in which she carries out her work." 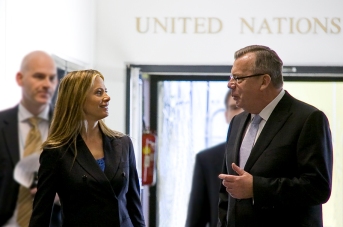 As the guardian of the United Nations Convention against Transnational Organized Crime and its protocols against the smuggling of migrants and trafficking in persons, UNODC is a key global player in the fight against modern-day slavery.

"Our work in raising awareness benefits tremendously from the support of prominent individuals from the worlds of arts and entertainment such as Ms. Sorvino. I am fully confident that her prestige, talent and enthusiasm will continue to advance our cause and will send a clear message about the urgency to fight this crime and help its victims", said Mr. Fedotov.

Ms. Sorvino said it has been an honour to work for UNODC in the past four years. "I've had the incredible opportunity to travel the world and meet with Governments, NGOs and survivors as part of my work for UNODC. I have interviewed scores of people whose lives have intersected with this modern-day slave trade, either as those fighting it, those victimized by it, or those perpetrating it."

"I have learned so much and have seen progress" she continued, "but we are still very, very far from really making a meaningful dent in the problem statistically. The UNODC 2012 Global Report on Trafficking in Persons for example raises serious concerns about low conviction rates -  16 per cent of reporting countries did not record a single conviction for trafficking in persons between 2007 and 2010."

The UN Goodwill Ambassador asked countries "to do better" in the fight against human trafficking: "We must make certain the recommendations, policies, laws and funding are put into practice and use, not simply paid lip service. Governments must vigorously go after organised crime groups involved in this trade, with the victims' and survivors' best interest at the heart of all actions. Everyone - Governments, businesses and individuals - can do their part with their own unique capacities; one of the most immediate ways to make a difference is donating to the  United Nations Voluntary Trust Fund for Victims of Human Trafficking, which helps victims directly."

Human trafficking ruthlessly exploits women, men and children and affects all countries - at least 460 trafficking flows were identified between 2007 and 2010 in the UNODC 2012 Global Report on Trafficking in Persons, with victims of 136 nationalities detected in 118 countries. Overall, about 27 per cent of detected victims are children with the average age of detected victims appearing to have decreased as child trafficking - particularly that of girls - has been increasingly detected in the last few years.