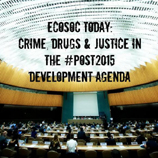 The discussion, which was held on 22 July 2013 as part of ECOSOC's substantive session this month, focused on "the Vienna-based Commissions and the importance of drug control, crime prevention and criminal justice in the context of the post-2015 development agenda, including the issue of human trafficking".

"If people are to have a hope of living free from fear, conflict and violence, we must tackle the global, interconnected challenges of drugs, crime, human trafficking and migrant smuggling, corruption and terrorism," said Mr. Fedotov.

"Let us ensure that addressing these threats is part of promoting sustainable development and securing a peaceful and equitable future for all."

Mr. Fedotov discussed the report of the High Level Panel on the Post-2015 Development Agenda, which emphasized the importance of building "peace and effective, open and accountable institutions for all".

"Simply put, security, justice and rule of law matter if we want to attain sustainable development outcomes," he said, highlighting UNODC's ongoing efforts to develop a monitoring framework to measure these issues as they relate to development.

Mr. Fedotov emphasized that the dialogue on the post-2015 development framework comes at a critical time, with high-level meetings to discuss global policies to combat drugs and crime also scheduled to take place over the next years.

"ECOSOC has a vital role to play in this process, and it is my hope that the Council will continue to reinforce its engagement in these critical issues," he said.

The discussion was chaired by Ambassador Martin Sajdik, Permanent Representative of Austria to the UN in New York and Vice-President of the Economic and Social Council.

Panellists included Ambassador Xolisa Mfundiso Mabongho of South Africa and Chairperson of the 22nd session of the Commission on Crime Prevention and Criminal Justice (CCPCJ); Ambassador Khaled Abdel Rahman Shamaa of Egypt, First Vice-Chairperson of the 56th session of the Commission on Narcotic Drugs (CND); Princess Bajrakitiyabha Mahidol, Permanent Representative of Thailand to the UN in Vienna; and Ernesto Savona, Professor of Criminology at the University Cattolica del Sacro Cuore in Milan and Director of Transcrime.

Remarks by UNODC Executive Director at the ECOSOC panel discussion: "Focus on the Vienna-based Commissions and the importance of drug control, crime prevention and criminal justice in the context of the post 2015 development agenda, including the issue of human trafficking"