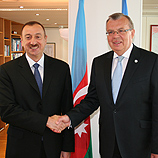 14 May 2013 - President Ilham Heydar oglu Aliyev of the Republic of Azerbaijan visited the United Nations Office in Vienna (UNOV). In a meeting with Yury Fedotov, the Director General of UNOV, who is also the Executive Director of the UN Office on Drugs and Crime, the President showed great interest in the work of both organizations. Azerbaijan has maintained an active role in international affairs since it was elected as a non-permanent member of the UN Security Council for 2012-2013.

"I am very pleased to welcome President Aliyev to the UN Office in Vienna. Azerbaijan plays a vital role on the international stage, and it has been a keen partner of UNODC in countering drugs, crime and terrorism in the Caucasus," noted Mr. Fedotov.

The Government of Azerbaijan has also proven to be an active partner in the work of UNODC and has a special focus on addressing international terrorism. Azerbaijan is also a close partner of UNODC and the World Customs Organization in their jointly managed Global Container Control Programme, which applies rigorous risk assessment to container analysis.

Cooperation between UNODC and Azerbaijan is also growing closer. UNODC has developed two national project proposals on drug abuse prevention. The programmes seek to raise awareness through the involvement of religious leaders and the prevention of drug abuse, HIV/AIDS  and crime among youth. UNODC also drafted a new Strategic Outline for Central Asia and Southern Caucasus for 2012-2015.

The Strategic Outline covers eight countries of Central Asia and Southern Caucasus, including Armenia, Azerbaijan, Georgia, Kazakhstan, Kyrgyzstan, Tajikistan, Turkmenistan and Uzbekistan. It will serve as a framework to guide the implementation of current and the development of future activities in the region.