Human trafficking is a dark stain on all our societies, says UNODC Executive Director in Minsk speech 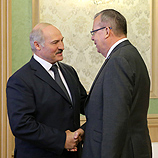 30 May 2013 - UNODC Executive Director Yury Fedotov paid a visit to the Republic of Belarus this week, where he met with President Alexander Lukashenko and other officials to discuss several issues, in particular human trafficking. Belarus has played a leading role in the fight against human trafficking within the United Nations. The country initiated an important UN resolution on "Improving the coordination of efforts against trafficking in persons,", which led to the review of the UN Global Plan of Action at the General Assembly two weeks ago.

Speaking at the International Workshop on Combatting Trafficking in Human Beings Minsk, Belarus, organized by the Interior Ministry of the Republic of Belarus and the United Nations Development Programme following the initiative of the Office of the UN High Commissioner for Human Rights, the UNODC Executive Director congratulated the country on its commitment to this challenge. "Within the UN, Belarus has been playing a leading role in the Group of Friends United Against Human Trafficking", he said.

Just over two weeks ago, a high-level meeting took place in New York where countries examined progress made on the UN Global Plan of Action. Adopted in 2010, the Plan calls for integrating the fight against human trafficking into the broader programmes of the United Nations to boost development and strengthen security around the world.

"The event was highly successful in helping us to reflect on past actions against human trafficking, as well as provide an outline of future activities" said Mr. Fedotov.

Belarus is also a strong supporter of the UN Trust Fund for Victims of Human Trafficking, having provided contributions which have directly helped grassroots organizations working with victims.

The country has traditionally been a source country for trafficking. Due to its geopolitical location, the country is also a popular transit route for irregular migrants moving westward in search of a better life. Although sexual exploitation of women and girls is of particular concern, the 2012 UNODC Global Report on Trafficking in Persons found that, between 2007 and 2010, male victims accounted for 12.9 per cent of detected victims in the country.

"Human trafficking represents a dark stain on our societies, and undermines our common desire for a safer world" said Mr. Fedotov in his speech. "No country or region can feel justified in ignoring this crime, which has millions of victims and generates billions of dollars for the criminals."

"To combat this crime, we need to build a comprehensive and coordinated response at the local, regional and international levels" he continued. This includes focusing on criminal justice systems, assisting and protecting the victims, observing fundamental human rights, as well as drafting suitable policies on migration and the regulation of the labor market.

"The Republic of Belarus takes a lead in many of these areas" he said. "I am glad that Belarus is such a valued and trusted partner in the fight against human trafficking and that it continues to promote the work of UNODC."

Aside from discussions with the President of Belarus, Mr. Fedotov also met with  Mr. Igor Anatolievich Shunevich, Minister of Interior Affairs, Alexander Konyuk, Prosecutor General of the Republic of Belarus, and Mr. Vladimir Makei, Minister of Foreign Affairs of the Republic of Belarus, among other government representatives. He also delivered a lecture on the work of UNODC to students at the International relations faculty of the Belarusian State University.

Executive Director's Remarks to the participants of the International Workshop on  Combating Trafficking in Human Beings, Minsk, Belarus