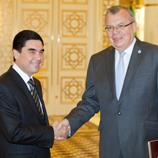 29 May 2013 - UNODC Executive Director Yury Fedotov concluded an official visit to Turkmenistan to meet the President of Turkmenistan and senior government ministers.

One of the key issues discussed was border control, especially given Turkmenistan's border with Afghanistan, which produces up to 90 per cent of the world's opium and heroin. "Turkmenistan's geographical position has led the country to play an essential role in countering illicit drugs and promoting the regional cooperation that is the foundation for this work," said Mr. Fedotov.

In a meeting today with the President of Turkmenistan, Gurbanguly Berdymuhamedov, Mr. Fedotov thanked the President for continuing to make the fight against illicit drugs one of the country's chief domestic and foreign priorities. He also said that Turkmenistan's commitment to leading the Regional Infrastructure Confidence Building Measures implementation under the "Heart of Asia" Ministerial Conference in Kabul was also helping in combating illicit drugs in the region.

As part of his mission, Mr. Fedotov visited the "Howdan" border crossing checkpoint on the Turkmen-Iranian border. The visit gave him an opportunity to see at close hand the work of border guards, as well as discuss various border security issues.

Yesterday, during the meeting with the Foreign Minister of Turkmenistan, Rashid Meredov, Mr. Fedotov outlined UNODC's work in the area of drugs, crime and terrorism in the region. He spoke of the importance of international cooperation and said that his office had recently presented a new Strategic Outline for Central Asia and Southern Caucasus, 2012 - 2015, to a range of international partners. "The Strategic Outline will serve as the framework to guide the implementation of current actions, as well as the development of future activities in the region," said Mr. Fedotov.

Discussions were also held with Iskander Mulikov, Minister of Internal Affairs of Turkmenistan. The two talked about the need to coordinate information sharing among law enforcement agencies. Mr. Fedotov also expressed a willingness for UNODC to enhance criminal intelligence capacities based on best practice among such bodies.