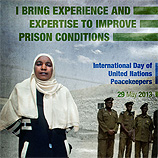 29 May 2013 - International peace and security needs are changing rapidly, and this year's International Day of United Nations Peacekeepers focuses on how UN peacekeeping is 'adapting to new challenges'. The day is an opportunity to raise awareness about new developments in the field while honouring those who lost their lives serving under the blue flag in the cause of peace.

"To meet emerging threats and rise to new challenges, UN peacekeeping is adapting its policies to better fulfill its mandates to bring lasting peace to war-torn countries", said Secretary-General Ban Ki-moon on his message to mark the day.

"UN peacekeeping is also working to help reform national rule of law institutions. By strengthening the police, courts, and corrections, UN peacekeeping forges trust in local authorities. A fair and predictable rule of law system contributes, in turn, to stability and sustainable development long after our troops leave" he continued.

UNODC also recognizes that building peace requires more than bringing an end to armed conflict - it also requires strengthening the rule of law for peace to be lasting. In order to assist in this critical process, it has developed jointly with the Department of Peacekeeping Operations (DPKO) the United Nations Criminal Justice Standards for United Nations Police.

The handbook summarizes the international human rights and criminal justice principles that United Nations police personnel must know, abide by and promote when deployed in peacekeeping operations and special political missions. As such, it is designed to serve a dual purpose. Firstly, it is a code of conduct for police operating under the United Nations flag. Secondly, it is a reference source to help national authorities to improve policing.

The fight against drugs and organized crime is also critical to the success of peacekeeping operations because criminals exploit regions weakened by war. UNODC and DPKO signed a joint plan of action in 2011 to strengthen cooperation in conflict and post-conflict zones and proactively address threats to stability and security. The partnership is aimed at strengthening national and regional capacities in the areas of law enforcement, forensics, intelligence, border management and money-laundering and at strengthening criminal justice systems.