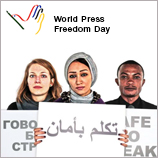 3 May 2013 - Each week a journalist loses his or her life for bringing news and information to the public's attention and securing the safety of those individuals working in the media is an urgent matter. The theme of this year's World Press Freedom Day, "Safe to Speak: Securing Freedom of Expression in All Media", highlights the need for action to uphold the right of journalists to carry out their vital work.

"Freedom of expression is a fundamental human right, enshrined in Article 19 of the Universal Declaration of Human Rights", said Secretary-General Ban Ki Moon in his message for World Press Freedom Day. "Yet every day around the world, journalists and media workers are under attack."

Over the last ten years more than 600 journalists and media workers had been killed - at least 120 in the past year alone. However, on average, only about one-in-ten cases of crimes against journalists, media workers, and social media producers has led to a conviction.

As a result of their work, journalists face intimidation, threats and violence from Governments, corporations, and increasingly from criminals and organized crime groups. The latter is of particular interest to UNODC: as the guardian of the UN Convention against Transnational Organized Crime, the organization recognizes the unique role that the media plays in exposing this multi-billion dollar a year business which poses an enormous threat to peace, human security and human rights.

Countless lives are lost as a result of drug-related deaths and violence, firearm deaths and the unscrupulous methods and motives of human traffickers and migrant smugglers. Journalists are no exception to this threat. In fact, threats to media practitioners stemming from international drug cartels and organized criminal groups are increasing.

In a bid to help increase the safety of journalists, UNODC is working in Mexico with the Government, the UN Education, Scientific and Cultural Organization (UNESCO) and the Office of the High Commissioner for Human Rights (OHCHR). In 2011, a joint initiative supported by the Ministry of Interior started to investigate threats against media workers. This led to the creation of a multidisciplinary committee, including several UN agencies and national ministries, which has helped elaborate a new federal law to protect journalists; establish a National Special Commission for the Monitoring of Aggressions against Journalists and the Media; and devise a draft national strategy and plan to address the issue.

The media's part in uncovering corruption is another point close to UNODC's work, given the organizations role as guardian of the UN Convention against Corruption. A free and independent media play a key role in investigating and exposing corruption and in this context, UNODC leads on an initiative to promote responsible and professional reporting on corruption using the Convention as its basis. This includes the collection of good practices, and the development of tools to facilitate responsible and professional reporting on the issue.

In April 2012 the United Nations approved the first UN Plan of Action on the Safety of Journalists and the Issue of Impunity in a process spearheaded by UNESCO. The Plan of Action includes measures such as the establishment of an inter-agency mechanism to handle issues related to the safety of journalists; assisting countries to develop legislation and mechanisms conducive to freedom of expression and information, and supporting their efforts to implement existing international rules and principles.