UN Volunteers make a difference to UNODC's work in the field 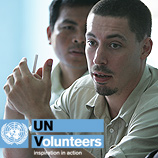 2 May 2013 - Every year, the United Nations Volunteers (UNV) programme mobilizes around 7,000 volunteers to serve in about 130 countries in the peace and development programmes of the United Nations. The work of UNODC also benefits from the support of a dozen UN Volunteers in offices across East Africa, Southeast Asia and Latin America, among others. Today, UNODC's Executive Director and UNV Executive Coordinator Richard Dictus signed a Memorandum of Understanding between the two organizations to continue to provide UN Volunteers with opportunities to work for UNODC in the field.

Belissa Guerrero Rivas is a UNV Gender Specialist working for a UNODC project in Vietnam. A Salvadorian attorney specialized in human rights law and women's rights, Belissa is involved in a UNODC project to support criminal justice responses to violence against women, particularly domestic violence. Before becoming a UN Volunteer, she worked in El Salvador and the Inter-American Commission on Human Rights (IACHR). She saw the opportunity to work as a UN Volunteer on gender violence in Vietnam as a chance to share her expertise in the fields of criminal law and women's rights.

Belissa joined UNODC to support the organization's increasing programme to strengthen crime prevention and criminal justice responses to violence against women. In Vietnam, the office works with the Ministry of Public Security and the Ministry of Justice to train, advocate and collect data on domestic violence responses. Among other activities, over 800 local police officers, judges, prosecutors and members of the Vietnamese Women's Union have been trained, and a 10-episode television series called 'Breaking the Silence' has been broadcast twice on national television to raise awareness.

"What I like most about my work" says Belissa "is having the possibility to create awareness on the importance of women's rights in a region where gender equality is still lacking."

Clay Nayton is an Australian national working in UNODC's Cambodia office as a UNV Community-based Drug Treatment Officer. Before joining UNV, Clay spent three years with a number of health-promotion NGOs in the country. As part of his work, Clay helps develop tailored strategies to prevent drug use and treat drug dependence in rural Cambodia, where drug consumption is a growing problem and overlaps with other health concerns such as HIV.

"The reason I decided to become a UN Volunteer was to have the experience of working for a UN agency in an area that has shown promising results with a relatively new approach in this region" he says. "My motivation stems from the changes I have seen in peoples' lives. Cambodia is a country that is still racked with poverty - one of the primary reasons that prompt youth to engage in drug use. However, certain avenues do exist where people are able to reintegrate back into there communities and families."

Since its launch in 2010, the UNODC-supported Community-Based Drug Treatment programme in Cambodia has shown positive results. It provides drug users with voluntary, cost-effective and rights-based drug treatment and care services in their home communities.

"What I like most about my job is that I am able to engage with the programme at multiple levels. I meet regularly with government officials and provide advice regarding policy and initiatives. I also go out in the field and engage with NGOs and healthcare staff, and strategize ways to create synergies in efforts aimed at promoting demand reduction for most at risk population groups", continued Clay.

Speaking at the signing ceremony in Vienna, UNODC Executive Director Yury Fedotov said: "Where we are fortunate to have these individuals, UN Volunteers provide critical support in helping UNODC deliver its services in areas of health, justice and security. They are very dedicated, with a motivation that is truly in line with UN principles of promoting sustainable human development. They are a great asset to our organization."

UNODC's work on violence against women

UNODC and drug use prevention, treament and care