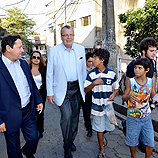 8 May 2013 - On the first day of his visit to Rio de Janeiro, UNODC Executive Director Yury Fedotov visited on Tuesday a Police Pacification Unit (UPP) that has been serving the communities of Pavão-Pavãozinho/Cantagalo, in Ipanema, since December 2009. The UNODC Executive Director, was accompanied by Rio's Estate Secretary for Social Assistance and Human Rights, Zaqueu Teixeira, and the Sub-Secretary for International Relations of the Civil Cabinet, Pedro Spadalle. Also present was Eduarda La Rocqua, President of Pereira Passos Institute, an organization responsible for implementing the UPP Social programme, which was developed in partnership with Rio de Janeiro Mayor's Office and UN-Habitat, and aims to promote social inclusion measures and access to citizenship in the locations served by UPPs.

After seeing Mirante da Paz, Fedotov walked through the community towards the UPP base, where he attended a presentation on the social and public security programmes implemented at the site. "Social inclusion and community development are essential components in prevention crime", said Fedotov. He also highlighted the efforts of the government of Rio de Janeiro and the Military Police in the fight against organized crime and illicit drug trafficking. "I came to Brazil to see how successful experiences of combating crime in Rio de Janeiro could be adapted to other places with similar security issues", added Fedotov.

The UNODC Executive Director also visited the base of the Cultural Group AfroReggae, where he participated in a meeting with former members of the drug trafficking factions in Rio de Janeiro and representatives of the state police, who are part of two initiatives coordinated by AfroReggae: the talk show Commands and the Employability project.

The first initiative promotes interaction and dialogue between former traffickers, police officers and spectators on issues related to reintegration and social transformation. It works to build awareness by bringing together often contrasting views of the world through an emphasis on education. The second project promotes the reintegration of ex-prisoners in the labour market and is led by former members of the drug trafficking factions known as Red Command, Third Command and Friends of Friends. Since its formation in 2008, the job creation project has created about 3,100 jobs.

During the meeting, Fedotov listened intently to the experiences of ex-criminals such as Washington Rimas, known as Feijão, a former member of the Third Command who led drug trafficking at the Acari complex, and today works as a consultant for AfroReggae. Francisco Monteiro, known as Tuchinha, told his story as well: a former member of the Red Command, he led drug trafficking at Morro da Mangueira, spent 21 years in prison and is now a consultant for the Employability project.

Claudio Piúma, known as Gaúcho, is a former member of Red Command and also participated in the meeting: "I lived for 40 years in the world of crime and I know that none of these people wants to be there. The hardest step towards leaving a life of crime is to find a path that leads people to be reintegrated into society, family and friends, and to a life of peace and happiness. Today AfroReggae is that path to many people".

Speaking after his meeting with AfroReggae, Mr. Fedotov said: "It was very important for me to hear at first-hand the accounts about the violence generated by drug trafficking in Rio, and to learn about the examples of rehabilitation." Mr. Fedotov went on to express his support for civil society initiatives such as AfroReggae and to highlight the importance of having community leaders such as Gaúcho and Feijão share their experiences at international forums. He also highlighted the innovation behind the projects that bring together communities, ex-offenders and police officers to discuss the problems created by crime, weapons and illicit drugs. "Such initiatives are enormously instructive for UNODC as they can provide a roadmap on how to reintegrate ex-traffickers in an effective and creative way as part of overall crime prevention interventions".

During the visit to the UPP, Fedotov stressed the role of UNODC in supporting capacity building for Brazilian police, developing comprehensive care for children and young people at risk of drugs, and working on preventing the spread of HIV and other diseases among vulnerable populations. "UNODC adopts a balanced approach to ensure that its efforts in the areas of law enforcement and criminal justice are complemented by its work in the field of drug prevention and treatment, always based on human rights principles", said Mr. Fedotov.

The UNODC Executive Director is conducting his first official visit to the country and will travel to Brasília on Wednesday, where he will attend the launch of UNODC's Liaison and Partnership Office in Brazil. The agenda of Fedotov's four-day mission includes meetings with Brazilian government officials, representatives of civil society organizations and journalists to discuss issues related to drug trafficking, drug prevention and treatment, transnational organized crime and trafficking in persons.