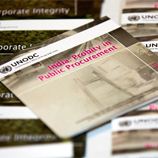 22 May 2013 - The private sector in India is vibrant and growing - accounting for a large share of the country's gross domestic product (GDP). Around 25 per cent of the GDP can be attributed to public procurement, with the private sector being a main supplier of goods and services. In light of the emerging and growing role of the private sector, the impact of corruption within this sector has become of increasing concern to Indian society.

Both studies assessed the compliance of existing and proposed legislation with the Convention. They also identified current practices and challenges at the grassroots level for both corporate integrity and probity in procurement as perceived by the public and private sector, as well as by law enforcement officials.

While both studies acknowledge that important legislation exists in India, under which corruption can be currently prevented and investigated, they found that the Indian legal framework could be substantially strengthened by the enactment of a series of new bills, as well as the amendment to existing laws to include bribery in the private sector as a punishable offence.

Regarding the strengthening of corporate integrity, the study proposed a series of measures: promoting a collaborative approach between law enforcement and the private sector; training in combating economic crimes for law enforcement officials; the need for whistleblower support programmes and external audits, especially in larger companies; clear responsibility and accountability for integrity in top management; and codes of conduct for employees as integral part of contracts.

With respect to probity in procurement, the study analysed specifically the public-private partnership approach and found that the enactment of the Public Procurement Bill would be an important step forward in regulating procurement and promoting probity. In addition, it found that specific provisions were required to strengthen oversight for public-private partnerships throughout the entire process - from bidding to implementation - as well as to strengthen accountability of officials and consultants working within such partnerships.